Matt Nathanson has a very sweet song called Wedding Dress. If you don't know him by that song, then you probably know him by his more well-known song that goes I miss the sound of your voice . . . come on get higher . . . I'm doing it such justice right now.

Anyway, that's the song that was in my head as I headed out with S and my mom to find a white sundress that would be my wedding dress at first and then would slide into my closet to be in my wardrobe as a choice of sundress for future activities. I have never wanted a wedding dress that I would wear for a few hours for one day. I guess that's the practical side of me. I did agree with Eddie that I should get a white dress.

So S and my mom and I were off to the store with the two of them in my backseat because S was being respectful and telling my mom to sit in the front while my mom was already climbing into the back. So there I was, the chauffer for the evening.

We got to the store and somehow found the dresses. It was a large store, very challenging to navigate. Everywhere we looked didn't make sense. There were dresses and then shorts and then dressed and then shirts and then pants. Nothing really had a place of its own.

We found a few dresses that were very pretty but not white. One was black and white and very very me but I'd agreed to white, so I let it look pretty on the hanger.

S found two dresses that were white. My mom found something and brought it over, saying, This is white and cute. I was like, Umm, that's a shirt. She was like, then never mind. S found another dress that was stained and we couldn't find another in my size without the stain.

I tried on a dress. It was just not fitting in any way. It had an eyelet top that looked like a baby's bib. Ugh. I climbed out of it and started to get annoyed. I don't like shopping. S was like, do you want to go to another store. I was like, we may as well. 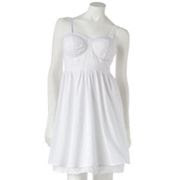 As we were leaving, we found another place that had dresses. Then we spotted a white dress. It looked like one I'd seen online. I tried it on. It was too big. I asked a sales rep if they had it in the smaller size. The size I showed her was a small. She was like, Which size? There's only one smaller size, but I explained, Extra Small.

They didn't have it but they had a kiosk where I could order it online and they would ship it for free.

And so began the fight with the kiosk that reminded me that nothing could really ever be that easy. First off, the screen is so huge that anyone within a ten foot radius around it can see exactly what you're doing, which includes your name and all your info on the screen (as well as what size you're getting--I don't care who knows what size I wear, but I'm sure some people do; plus, what if you're buying undies or something? Seriously.).

When it got to the part where I had to swipe my card, it didn't work. I swiped it several (hundred) times and it didn't work. So I chose to put my info in manually. That took about ten tries because if I messed up even one letter and tried to delete it, the machine took me back to the beginning. Ugh!

BTW--this whole time, my mom is standing there holding the dress up behind me so no one can see what I'm doing. My mom is shorter than I am so I'm not sure what this was accomplishing other than bringing me amusement, which I needed lest I punch the machine.

I had a discount code, too. That's when S called over the sales rep to help. The rep was like, I want to throw this machine across the room. My mom was like, I'll help you. Apparently, the kiosk sucks all the time and this woman is stuck helping people with it all day long.

She showed us what to do with the code--which we should have been able to figure out but by that point, we just didn't want to figure anything out anymore--and we typed it in. S was like, this is the cheapest wedding dress ever. I was like, I have to buy a bra and it'll probably be more expensive than the dress.

In less than an hour, I'd gotten my dress. As we got back in the car, my mom, climbing into the front seat, was like, do you have shoes? I said, I have two pairs to choose from. S, from the back seat was like, you're almost all set then. Yes, I am. Now for a bra. Matt Nathanson does not have any bra songs. Does anyone?
Posted by Christina at 1:27 PM