The Ring's The Thing 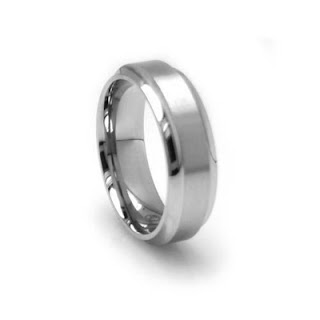 Everything looks strange on Eddie because he's never worn a ring. We visited a few jewelers and the first challenge was getting into the mindset of what a ring should look like. The second challenge was figuring out his ring size since some of his knuckles have gone through some damage from sports.

We sat down at one place I'd found rings online from that looked like something he would wear. The girl came over to help, said she was from Pennsylvania and this is the largest selection of men's rings she's seen in any store. She showed us a bunch of 14K gold rings. I asked to see white gold at 10K. She showed us more 14K rings. Then she wanted him to try on bands that had diamonds in them and I was like, No he's not wearing that. They looked like women's rings. Eddie was like, Thank you. Sometimes he thinks it's rude to say no even when he doesn't want something, so in this situation, where I'm a bit more comfortable than he is, I was the one doing all the talking.

I asked to see the titanium bands. He tried on a bunch of both metals. She said he looked like a 10 so he kept trying on 10s. They all looked weird except for the titanium one. It would have to be resized because they had only 11s. She said she couldn't send it out because it would take about three months and we wouldn't have it in time. Everything she said sounded made up. I suggested to him we go shop around some more.

In the next store, the first thing the woman did was measure his finger. His actual size is 8 and 3/4 or 9. So looking and guessing about a 10 is not really what you're supposed to do. Maybe that's how they do it in Pennsylvania. This store also had the same size selection as the previous store, you know, the one with the widest selection ever seen. This woman explained that Eddie needs a 14K gold ring. needs it. She said, once it's on, it's not like you're going to take it off. We all laughed politely. I insisted he try on the titanium rings, too. We asked if they could be resized in a timely fashion. She said, yes. As opposed to the decade it would take in the first store. As Eddie waivered back and forth, she said, go talk about it.

We left and headed to one more store. We walked over to the men's rings and no one approached us. I was like, Oh look they have the metals listed. Their sign explained which metals were good for what you'd be doing during the day--which were scratch resistant and such. It was helpful.

A guy came over and asked if we'd been there long. Eddie immediately said, No not at all. I was like, yup, a few minutes. We were there like eight minutes, but it was actually a handy eight minutes during which Eddie got back in the game and didn't feel like he'd never find a ring in time that was cost effective and fit. The guy showed us the titanium rings first because they are the most scratch resistant. He remeasured Eddie's finger. We asked about resizing and he said that usually it takes two to three weeks but he could put a rush on it, too.

And that's how we got Eddie a ring. See how easy it is when someone comes over and helps you in a way that is actually helpful? The ring is on its way. Soon enough, Eddie'll get used to what a ring looks like on his finger. After all, it's not like he's gonna take it off.
Posted by Christina at 10:00 AM