I have all kinds of fun stories to tell and I was looking forward to telling them in between checking my work email and new online and hybrid classes. Instead, I'm telling only one non-fun story and then getting off of the computer because I'm tired from the meds. Why am I taking meds? Because people can't drive.

I was driving home from work after teaching one class in which 12 of 24 showed up, which is more than I'd expected because this was Wednesday and some people were still snowed in. I was happy to be driving home on a road that was clear and dry and clean and not worrisome at all.

I got off the parkway and headed south on Peninsula, keeping to the right lane so everyone else not doing the speed limit could fly by. Up ahead, cars in front of me kept braking. So I kept braking even though I was about ten car lengths behind them. Then I was closer and closer even though I'd slowed down. I then saw an SUV stopped in the right lane with its hazards on. It was blocking traffic and people were trying to get over into the left lane. I came to a stop behind the two cars that had also come to a stop behind the SUV.

I sat for a moment and saw Speedy Baddriverson pulling around me, looking at me, and then shaking her head. I think she knew that this was not good. The SUV pulled away, so now we were blocking traffic in the right lane and could not pull onto the shoulder because the snow had been plowed onto it an little Yolanda can't go up a small hill let alone go over a foot and a half of packed snow on the roadside.

I called the cops. I did not shout Noooo Noooo Noooo into the phone at them. They asked if there were injuries. I said, I don't think so. They said they'd be on their way. I stressed that we were blocking traffic and cars were swerving around to avoid us because there was no shoulder. They repeated that someone would come.

As I was on the phone, Speedy Badderiverson got out of her car and stood next to mine. She was standing in the middle of the two lanes where all the drivers were swerving. I rolled down my window and she said, I am so sorry--I couldn't stop my car in time. I said, Well, you shouldn't have been going so fast--please get back in your car because it's dangerous to stand there. She got back in her car seemingly oblivious to how dangerous this was to be in the middle of the lane.

I called Eddie. He stayed on the phone with me as I shouted about every single car that was careening towards us and swerving around at the last second because everyone was speeding and no one cared that my hazards were on. There were trucks coming. I knew if cars were behind those trucks, they wouldn't see us. The police were not showing up. Finally, I said to Eddie, I have to move! He said, Move then call the police.

I went around Speedy Baddriverson and waved for her to follow me. She did. I don't know if she knows why we moved. I found a righthand turn lane and parked in it with her behind me. Eddie arrived and parked behind her. I had to call the police two more times because they called and said they couldn't find us and then they redispatched the officers. I asked if I was going to get arrested for leaving the scene of the accident. He said I would not be arrested.

A police officer arrived and put his flashing lights on so people would stop lining up behind us in the turn lane. Why they were lining up behind cars with hazards on is beyond me. The officer asked where the collision happened. I explained after the first overpass but before the second. He said there might be a jurisdiction issue. I stressed that I had to move because it was dangerous. He said he'd do the report and took my info. Then I watched him talk to Speedy Baddriverson as she gestured and explained in her words what happened. I don't know why it took so long to say, I rammed into the back of her car because I was speeding and couldn't stop in time on the dry clean road.

The officer came back a few minutes later and informed me I could get the report online. He didn't say, Drive safely, or Good luck, or Hope it all works out. I don't think he cared much.

Eddie followed me home and then went back to work. My mom took me to urgent care. They did a whole rigamarole of stuff, gave me anti-inflammatories and muscle relaxers, told me to rest, and warned me: It's going to get worse tomorrow. They also said I might have to follow up with treatment if I didn't feel better once the meds were done.

I submitted information to my car insurance on my app and they called me later on. They also said, It's going to get worse tomorrow.

I thought I felt better this morning, but I was wrong. Once I started moving, everything hurt again. I have to call the insurance company again. I checked the website for the collision report and nothing is there yet. I checked the insurance website and there are a bunch of forms I have to fill out. I filled one out last night but decided the others had to wait because I was falling asleep from the meds and I didn't want to start writing in gibberish.

So, my semester has started with canceled classes from snow on day one and the morning of day two, and then with getting rear-ended by Speedy Baddriverson. This was not the week I'd planned to have.

When my head, neck, and back no longer ache -- whenever that will be -- I'll regale you with stories of Broadway and Motown and the Golden Globes and Las Vegas. For now, it's just medication and ice packs and heating pads and being really really annoyed.
Posted by Christina at 11:15 AM No comments:

I was sick from December 22 to January 2.  I had not been sick for months and months, so when the germs stake their claim, they don't like to leave.  At first, I thought I had casino cough, something I found online when I was researching how I got the tingling cough that was annoying me all day on Sunday.  I found something called "casino cough" caused by the smoke, poor hygiene, and lack of fresh air in the casino environment.  I researched sickness and casinos because the day before I got sick, Eddie and I had a really great time in AC.  We drove down in 65 degree weather in December and stayed at the Tropicana for the day.

On the way there, this car once again proved my theory that a large percent of the population is dumb.

The drive down was quick and easy.  The casino was empty.  When we entered, we came upon the much-touted laser light show.

Whoo-hoo! What a show!

We ate at Hooters.  We walked the boardwalk.  We bought some salt-water taffy.  We roamed around the casino to look at the Christmas decorations.  He gambled a bit.  I lounged around.  Then we had dinner--he had a really gross slice of pizza that had dough that was still raw and I had a very delicious crepe and I wanted ten more.  More gambling.  Then we came home. 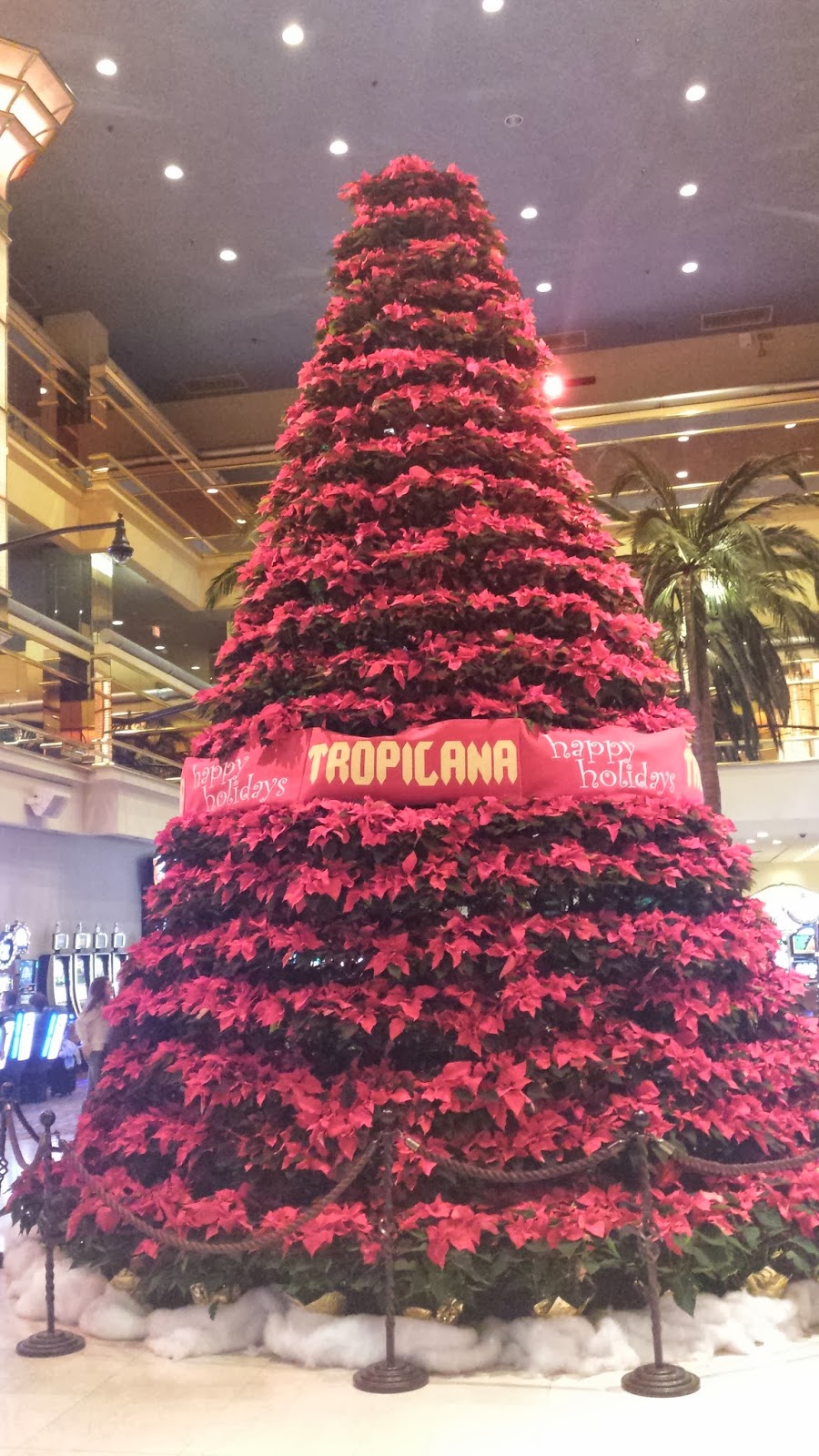 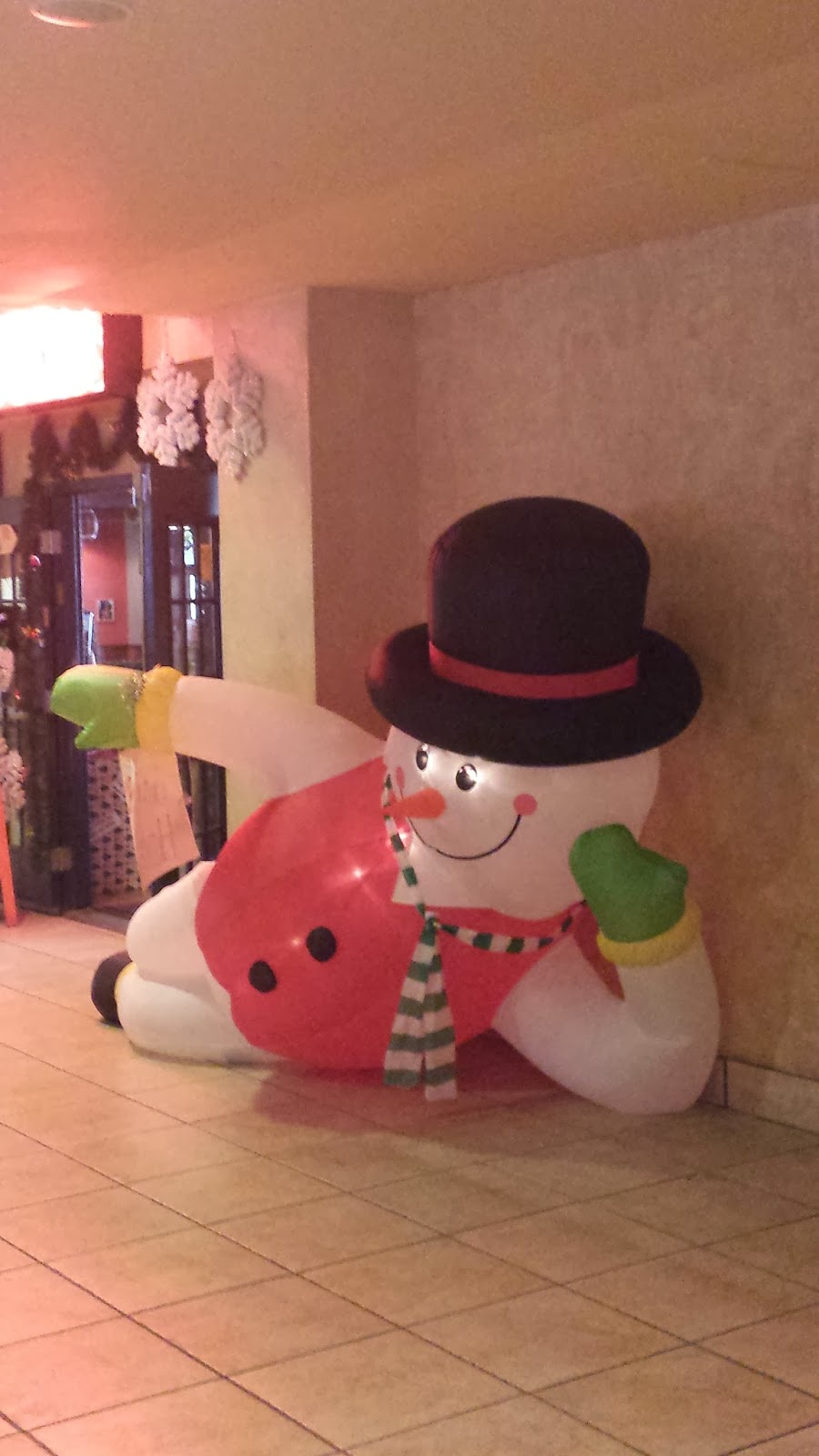 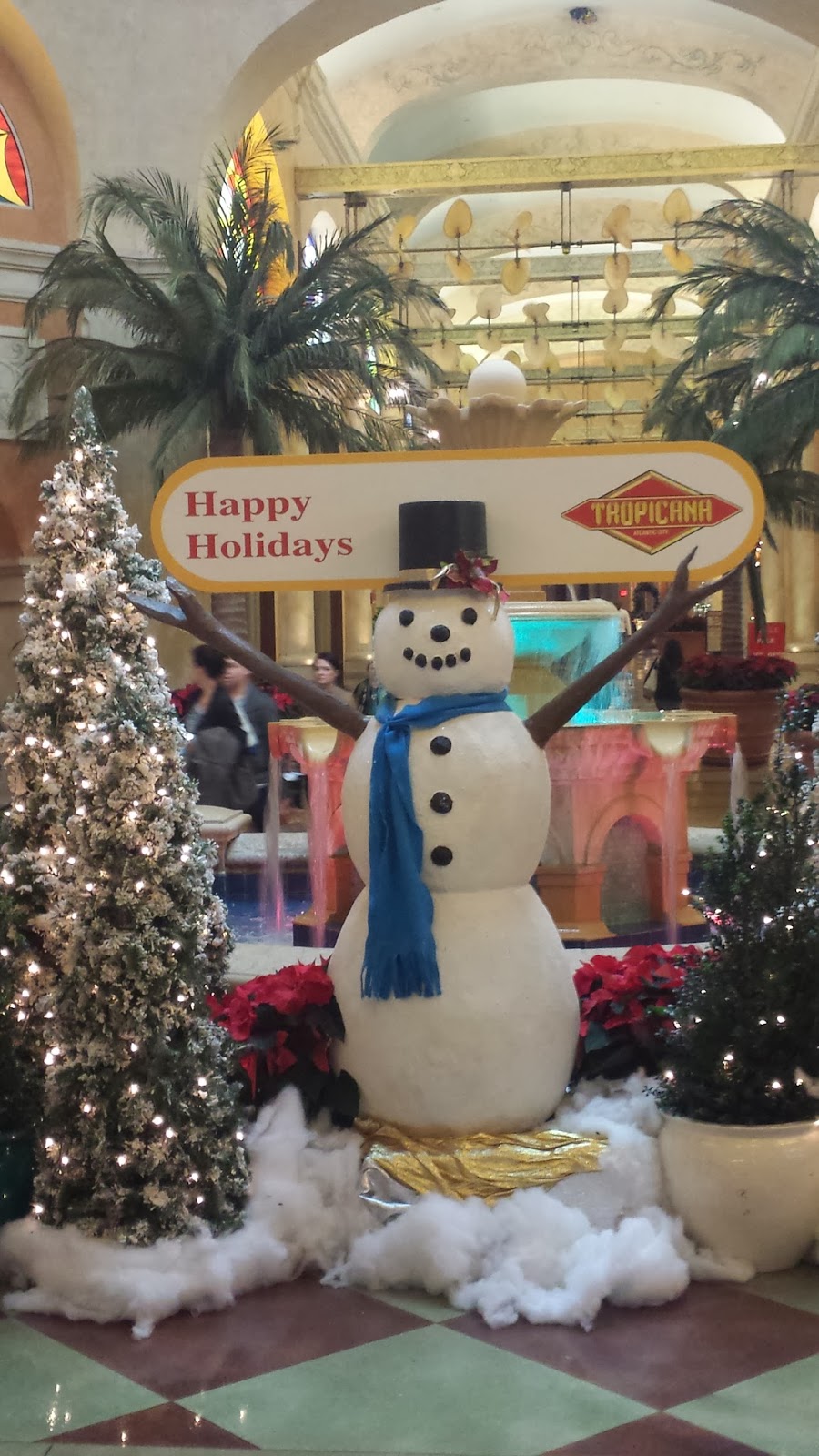 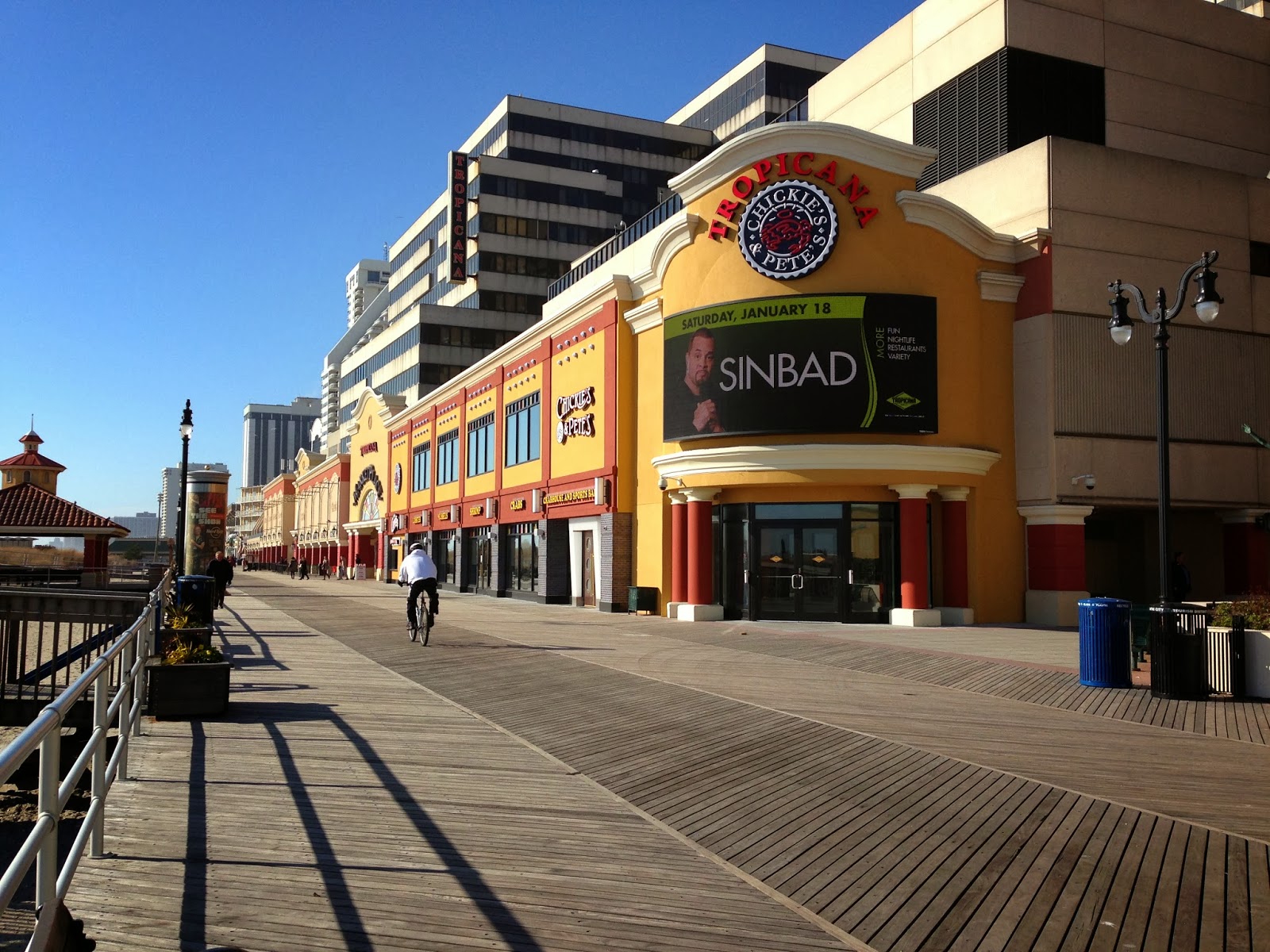 The next day, I was coughing.  I chalked it up to the smoke.  Then I found casino cough online and self-diagnosed.  Then I went to help my mom make meatballs for Christmas day.  That's when it hit me. I finished making them and was like, I have to go lie down.

And that's how I stayed for the next ten days or so, on the couch, coughing and feeling shitty.  I didn't have a fever yet I had chills followed by sweating (and my mom told me a few days later, Oh you had a virus.  Thank you, Dr. Mom).  I was one big ball of germs and I tried to keep it away from Eddie by washing blankets and spraying everything with Lysol including the air I was exhaling.

He got sick anyway, but only the sniffles and a headache for about half that time.  Meanwhile, I was sweating and shivering on the couch, unable to even watch a movie full way through.  Gross.  Very gross.

On Christmas morning, we went to my parents' living room for fifteen minutes of opening presents.  On New Years, we sat on the couch and I forced myself to take a nap while Eddie watched Riddick, a movie that should never have been made because it was very stupid.

I am finally back to normal with only a few days here and there of Omigod I'm relapsing scares.  I don't think it was casino cough after all.  Thinking back to the last day of the semester, I shook a lot of hands, conferenced with many many people in a small hot room.  Basically, I sat in a petri dish for nine hours, and someone must have carried in something and in all that handshaking and paper exchanging, the germs won.  This semester, there will be no handshaking and lots of Lysol.  I don't think I'll lose my job if I spray down everyone who comes into the office.  I'll have to check my contract.
Posted by Christina at 10:49 AM No comments:

Not only do I write poetry, I read a lot of poetry so that I can steal really good lines from other poets.  This is not called plagiarism.  This is called "the craft."

I've recently gone on a reviewing kick.  Why read and steal from the collections only when I can also write about them?  And judge them publicly?  I mean, I do it already on Goodreads as you already know from my Bookshelf page, so why not for journals?

And so, the Winter 2014 edition of Gently Read Literature has published two reviews I wrote, one for Emma Bolden’s poetry collection Maleficae and another for John Gosslee’s Blitzkrieg.

I wonder if I'll start reading poetry reviews and stealing from them too.
Posted by Christina at 9:57 AM No comments: