In Redux: An Open Letter To Automatic Doors That Do Not Open Automatically When I Approach

Recently, I submitted this open letter to McSweeney's about an ongoing problem--automatic doors and me and the fact that they do not open when I approach.  My piece saw the same fate that most writing does.  Rejection.  However, I've got to thank McSweeney's because the rejection was actually personalized.  The rejector apologized for passing and then sweetly stated, "here’s hoping the doors get your message eventually."

What's the message?  Here's the letter so you can see for yourself.

I have only one simple question: why don’t you open when I walk up to you?

More and more frequently in recent months, I find myself dreading the walk-up to a set of you doors that have an electronic eye attached to motion detectors to make you open. More and more frequently, I stand in front of you and nothing happens. Actually, that's not true. What happens is I stand in front of you and you remain closed. Then I don't know what to do.

Sometimes I take one step back and then forward again. You do not open.

Sometimes I shuffle side to side. You do not open.

Sometimes I step aside and wait for someone else to exit or enter so I can slip through, ninja-style. You open, but begrudgingly. Apparently, you also have something against ninjas.

Sometimes I relent and walk away as you remain closed.

I have yet to flail my arms around, direct my face at the camera, and shout, “Hey, let me in! I only need a banana and some Kleenex!” I’ve been on the verge of doing so, but it may look ridiculous. Then again, I look kinda ridiculous standing in front of closed doors, watching longingly through the glass at the happy shoppers with their carts, hoping that you'll open. And I also look kinda ridiculous doing the hokey-pokey-sidewalk-shuffle.

And again, I probably look ridiculous walking up to a set of closed doors, waiting, and then walking away for a reason not apparent to anyone else around—those innocents, unaware of our unspoken standoff that you have begun.

I'm not talking about one particular set of you. This refusal of entry has occurred in many places: at CVS, at work, in supermarkets, at several places in Denver. It’s as if you have a national network through which you’ve sent out an APB with a screenshot of me in half a side-shuffle with the caption: Do Not Open Up For This Little Woman No Matter What Movement She Makes.

At first, I thought that was the reason: maybe I'm not tall enough. I contemplated getting stilts or a pogo stick. I contemplated taking up with the Harlem Globetrotters, begging them via Instagram to accompany me wherever I go just in case I need to go from the outside world into a building.

Before making these circus-like purchases and borderline-sane requests, I realized, no, it can’t be my 4 foot 10 inch frame. Adults in wheelchairs for whom some of you doors are specifically installed (like the one at work at the top of the wheelchair ramp) can get you to open without a problem.

So while I would like to think that no one and nothing in this world could possibly hate me aside from several students who failed that one semester of comp and perhaps a waiter in Denver, I’m beginning to realize that you might not like me. If that’s the case, I would really like to know why, so that I could make it up to you and you could open for me again. And yes, I realize, I look kinda ridiculous asking automatic doors to have a sit down and hug it out, but what’s more ridiculous is pushing a shopping cart up to the local A&P and waiting there until someone else decides it’s time to get some milk.

I’ll be awaiting your reply. Out in the parking lot.

The doors?  Have not gotten my message.  Within days, the pesky automatic door in the S building on campus closed on me.  You know how automatic doors usually pop back open immediately upon striking something?  Yes, well, this one did not.  It bumped into me, I jostled back and forth, and then, and THEN, it hit me again.  I shit you not.  Just one more ram into me for old time's sake.  I stumbled out of the doorway unharmed save the embarrassment of semi-animate non-rational objects getting the better of me, a human being with several advanced degrees and a career in higher ed.

Clearly, this is McSweeney's fault.  Clearly.

So no, they haven't gotten the message, at least not up until eventually now. I suppose I'll keep waiting. Outside. Still.
Posted by Christina at 7:00 AM No comments:

Because Groupon had discounted tix and because I like festivals that have booths that give things away, Eddie and I went to the Green Festival.  And I got free stuff.  And in an unprecedented turn of events, we also bought things.  Wow!

Basically, the booths were made up of organic and green-grown food and drink products, solar and wind powered companies, and some clothing, accessory, and home boutiques.  Everything was all about reduce, reuse, recycle.  Also, there were some random things like newspapers and car contests because they helped fill up the smaller room of the Jacob Javitz Center.

I tried a lot of samples, and most of them were delicious.  I tried the not-so-delicious green grassy drink that the guy claimed tasted like berries.  He tried and tried to get Eddie to sample it, so I finally did, turned to Eddie, and was like, There's no way you'd like this.  Finally, the guy stopped pestering him.  I got Eddie to try the pumpkin seeds because I knew he'd like them. After eating them, he bought a bag because they were delish. I had some marinara sauce from Michael's in Brooklyn, and now I want to go to Brooklyn to eat there.  I also tried some not so great hummus products followed by some very yummy kombucha tea.  Then I had some hemp seeds and the guy was like, Open your bag, and then he dumped lots of packets of hemp seeds into it, and was like, They're free so take a lot!  This guy?  Speaks my language.  Over at the So Milk stands, some woman was looking for something to have and everything the guy offered, she didn't like.  I don't know why she was at the stand if she didn't want any of the products, but I waited patiently so I could get a bit of free soy ice cream.   I then tried Brooklyn Dark chocolate.  I couldn't get over how good it was.  I gushed to the woman about it and she kept handing me tiny bits to sample and I kept eating them. We went back at the end to buy some bars.  I think because we actually went back as opposed to what I and others usually do--say we'll come back and then don't return-- the guy gave me an extra bar. Yeay!

When we left, I carried a big bag of free stuff, and Eddie said, I got something for free.  Then he held up a green chip that he was supposed to use to cast a vote for a group to win a grant.  Instead, he liked the chip so much that he kept it.

We made our way to get some linner (lunch/dinner) at a diner we'd passed while walking there. You'd think I wasn't in the mood to have a meal since I'd nibbled my way through the festival, but diner food is my jam. AND it was the best city diner ever, and if I want diner food in the city again, I'll go back here. 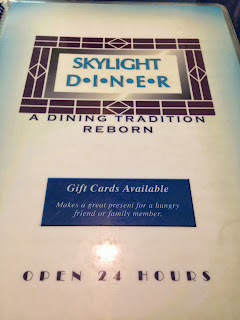 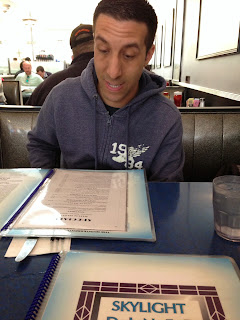 As for my free stuff:

Posted by Christina at 11:49 AM No comments: 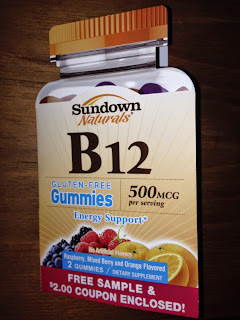 Posted by Christina at 10:58 AM No comments:

Email ThisBlogThis!Share to TwitterShare to FacebookShare to Pinterest
Labels: Free

Doing Yoga In Pajamas. In Public.

I started doing yoga secretly in my bedroom when I was 15, when I’d found a layout about five yoga poses in Sassy Magazine. The photographs were in sepia. The instructions were simple: Breathing? I could do that. Sitting? I could do that, too. Throw in a down-dog and I was rockin’ it.

Secret Yoga became part of my nightly physical fix. After Secret Dancing around to The Pointer Sister’s “Neutron Dance” in my “You Are Here” Milky Way Galaxy T-shirt, I settled into some secret cat-cow and then secret corpse pose.

What’s with the secret stuff? I was rather awkward and shy to the point of tears. Everything I did was kind of secret. What would people think of me dancing by myself? Now I was also doing this weird yoga thing that no one else I knew was doing.

Years later, I realized nothing had to be a secret....

Want more? Check out the rest of this piece entitled "Why I Go To Yoga Class In Pajamas" in elephant journal, a fun and informative website about yoga and more.

Posted by Christina at 10:41 AM No comments:

9 Songs We Sang As Kids That We Definitely Shouldn't Have

When I listen to the radio while driving alone and a throwback from the '80s or ‘90s comes on, I roll down the windows, turn up the volume, and yell, "This! Is! My! Jam!" Then I sing along. Loudly. You've been there. We've all been there.


The difference between singing along now versus singing along strapped into the backseat next to our siblings with our parents up front is that now, we not only pay more attention to the lyrics, but we know exactly what they mean. Then we realize that when we were young, our parents were either not listening or were simply happy we weren't beating the crap out of each other or whining about how hungry/thirsty/tired/bored we were.


Here's what we sang, and why we probably should not have....

Wanna read more?  Head on over to The Mid, a great new website that focuses on life in the messy middle.

P.S.  The title says nine songs, but there are only eight.  I have no explanation for that.
Posted by Christina at 9:20 AM No comments: