The Summer Gazebo Reading Series on the Schoolhouse Green in Oceanside is exactly what the title suggests--every summer on Monday nights, a bunch of writers gather round on the grass next to a school in Oceanside to listen to a few writers read their stuff from the very pretty gazebo. It's a really great series. Luckily, I was invited to be a part of it.

Two years ago, I read and almost made the director pass out. He has a strict PG policy so I gently nudged the line. I didn't break any rules. He told me he was flipping out on the inside but then I brought it around. It was a poem based on a Bryan Adams song, so blame Bryan Adams.

This year, I had no such push against the line. As Eddie looked around at the crowd, he told me flat out, You better not curse with this audience. I was like, I can't anyway--there's a rule against it. He was like, good because this is not the group to do it in front of. Heh heh. He's a good evaluator of crowds.

Instead of using words for shock value, I was going to use my plentiful booty. You see, the wind was not blowing as we left the house and got into the car. When we got out of the car at the schoolhouse green, my short dress was whipping around all over. Oh, I make bad decisions. Still.

I put my hair in a ponytail. I never do that. I also wound up walking around with one hand clamped on the side of my dress. This was not good.

When I met up with the director, he was like, I have a special guest for you to meet. Turns out that his nephew is a student in the online poetry class I'm teaching. They basically forced him to come. He didn't want to seem like he was sucking up, but they told him, oh come on come on you have to come.

So I did my teachery thing. I was like, So you got all your work in right? His face dropped and I was like, It's not due til tomorrow. He looked relieved and his whole family laughed. Ohhhhh, poor him. I told him he was going to learn a lot and he should enjoy it. Then I left him alone. Eddie was like, you were really outgoing. I was like, I am more outgoing with students than with anyone else because students get awkward when they see their teachers out in public. 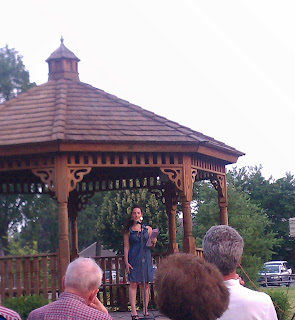 As the readings began, D showed up with a chair. I explained the whole dress issue. Then the three of us settled in for an interesting time. Everything was pretty entertaining. When it was my turn to read, I held my dress and held my poems and somehow got through it without flashing everyone.

The final reader was also wearing a dress. Hers was long but had slits up the sides, which the wind caught. This woman was reading from her new novel. At one point, she said "bitch" and immediately D and I looked at each other and gasped. She cursed! She cursed!

When it was all over, my student actually came up to me to say goodbye, which was a very bold and nice thing to do. Then we all chatted a bit with the poets and the audience, but mostly, I just wanted to get back to the car. The wind was still blowing. No one needed an aftershow.
Posted by Christina at 10:52 AM