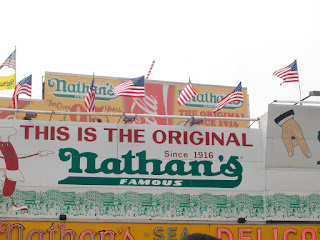 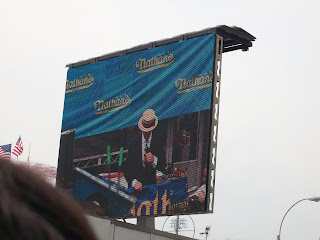 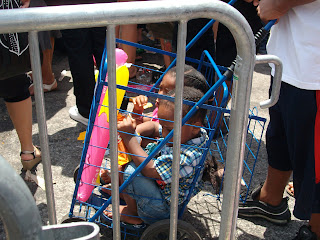 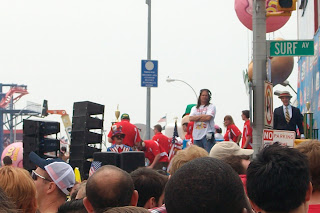 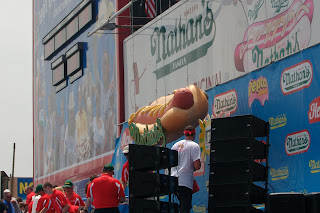 Nathan's Annual Hot Dog Eating Contest is gross. Eddie and I arrived at the corner of Surf and Stillwell as the women's competition was finishing up. This year was the first year the women competed. An Asian woman won and then climbed into the crowd. She did not throw up on anyone.

The crowd grew and moved and we were in the thick of it as the eating contest people prepared for the men's contest. There was a rapper, who is also a competitive eater; he didn't qualify this year. There was a break dancer. There were acrobats who climbed up and down on poles and ribbon-like sheets. A man sneezed on me. That was not part of the entertainment. It was a guy who pushed his way through the crowd, stood in front of people, and then sneezed on me. People kept doing that, not sneezing, but pushing through and deciding to stand in front of people who were already there. One old guy walked right in front of someone, clearly blocking her view, and said, This is a good spot. Yes, it is a good spot, which is why someone else was standing there.

The guy on the mic for the most part is the guy who is the president of the competitive eating association. He wears a patriotic hat. He screams into the mic without being able to really excite people. He rides up and down on a hydraulic lift. It's all very absurd.

We watched the contest on a big screen attached to a truck. During the contest, the feed went out, which produced a collective moaning Awwwww. That was probably my favorite part. The feed came back on and we were able to keep watching the contest that was about 50 feet away from us.

Joey Chestnut won again. It was gross. He jiggles and wiggles as he eats. Blech.

Because the poker tournament had gone so late, I was exhausted so I took a midday nap, something I rarely do. It was exactly what I needed to gear up for the fireworks.

Eddie had been excited to take me to the 69th street pier to watch Macy's fireworks from Brooklyn. On there pier, there were kites and children, which is not a good mix. We stood near the railing to watch, behind a few people. When the fireworks started, the people in front of us left in about two seconds, giving us a front row view.

Two boys next to us provided most of our entertainment. One was telling the other how his mom celebrates holidays on a boat. The other one asked, How did your mom get on a boat? And the other one answered, because my mom's a G. I shit you not. Then he went into a story about how his mom's boyfriend got into a fight once on a boat and the coast guard came on the boat with M16s. Eddie was like, that story is totally made up. But that banter coupled with the fireworks made for a very exciting evening. 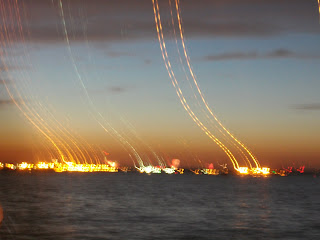 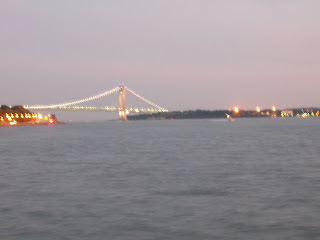 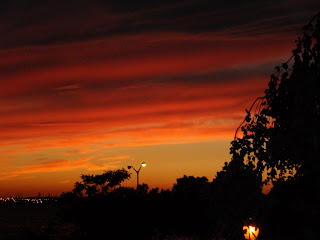 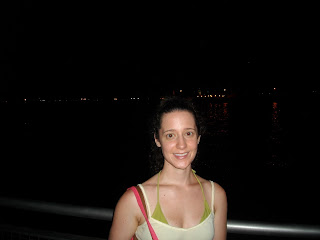 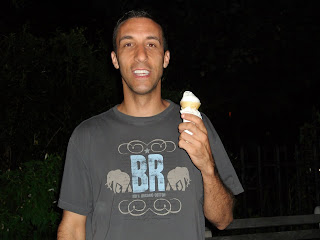 To avoid the bumper to bumper traffic on the Belt to get home again, we stopped off at the Vegas Diner. The staff was fighting when we got there, and that was funny. I had a waffle! Then we were able to watch fireworks all the way home, including some that were being set off on a rooftop that looked like they were about to set all the buildings on fire. Now that's patriotism!

And now, for some poorly shot footage of the contest. I don't know why this happens, but when you record something already on a screen, it comes out weird. So that's part of the poorness. The other part is my lack of camera skills.

Posted by Christina at 8:00 AM

Email ThisBlogThis!Share to TwitterShare to FacebookShare to Pinterest
Labels: Eddie, NYC, On Holiday