Checking Out The Venue

Eddie hates geese. I know this because we went to visit our wedding venue in person after booking it after seeing it online only, and it had geese there. I'm way ahead of myself. So here we go from the start.

Where can we get married?

Not a church. Not a temple. No religion.

Not at the house. Not in the backyard. Too laid-back. And cramped.

Not at a hall. Not at the beach. Too confusing for either of us to understand how to do.

How about a park? I listed all the parks in Nassau. I found them online. Some had pretty pictures. One is down the street from my grandma's place. 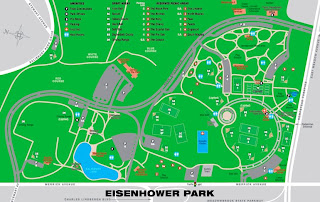 That's how Eddie and I found ourselves driving back and forth through Eisenhower Park, about six times in all, looking for the building that issues the leisure passes. We finally asked someone in the snack and golf cart stand where to get one and she pointed to the brick golf building. We went in and the woman was like, Window Three!

We walked to a different window and no one was there. We saw the same woman through Window Three that we saw when we walked in and stood in front of her at what I suppose was Window Two. There was a door next to Window Three so I wondered if we were supposed to go through it. Just when I was about to push on it, the woman came over to Window Three and asked for my driver's license and asked if I was getting one or two passes. I said one. She took down my info. Then she asked me to sit in a chair. I did. She took my picture. Ah, that's why we had to be at Window Three. It had a camera.

By this time, Eddie had disappeared behind the screen I was sitting in front of for the picture. What was he doing? Fighting with the snack machine, of course. He'd put a dollar in and it was not giving him anything in exchange and it was not accepting more money. We pressed some buttons and then finally got the dollar back. I told him the universe didn't want him to eat from the machine.

Finally, the leisure pass was ready. I noticed two things upon walking out with it: 1. The name of my street had an extra R in it. 2. It was good until 2014. Sweet! I'm totally getting in as much leisure as possible for the next three years. I would say that it's worth the cost for that amount of time, but really, aside from the discounted wedding permit and a discount in golf that I'll never use, I don't know what I can do with it. The website for Nassau County Parks says that with the leisure pass, I can do a whole bunch of things for free or for a discount, but it fails to list exactly what those things are. I plan to carry around the pass wherever I go and show it to whoever will look at it in the hopes of getting something for free or at a discount. Plus, the picture isn't that bad. Maybe I'll start showing that to people when they ask for my ID instead of my license. The picture on my license is heinous and no one under the age of 21 is going to own a leisure pass.

With my leisure pass in hand hot off the computer lamination press, we headed to the admin building where the people in the leisure pass and golf office thought we could file the wedding permit. Really, no one knows a whole lot about these permit things. They just magically happen. We found the little house where the picnic permits are issued. We'd planned to ask if we could file the wedding permit there, too, but the office closed at 3:00 and it was now 3:04. Dangit. We went straight home, slapped a stamp on an envelope, and mailed the permit in, complete with my leisure pass number written in big bold happy digits across the page. 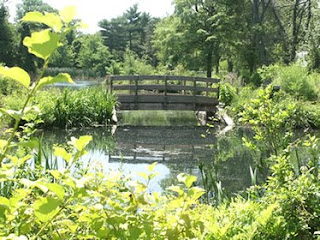 Assuming we could use the park because it was very unclear as to how this whole thing would work--being allowed or not to use the park--we visited. I pulled up to the gates which were two blocks over from where I thought they were, Eddie asked, So we can just go in? I was like, yes. He goes, so it's open for everyone? I said, Yes, it's a public park.

That's a drawback. When the ceremony is happening, anyone can be there. We can't mark off a part of the park. We have to get there early to guarantee a specific spot if we want it. This park is not the busiest park in the world, so it shouldn't be too much of a problem, but we are getting married around noon, so that's high time for picnics.

Anyway, we walked into the park and walked down one trail. There were a lot of bugs flying around, but, after all, we were in a park. There were supposed to be bugs. The path was brick. That was easy. We made our way to the pond. There's a bridge that goes over a narrow part of the pond. There's also a pier-like structure that juts out into the pond, but a huge weeping willow-like tree that also looks like a monster basically consumes the entire pier thing. When we turned to go, the geese were on the path. 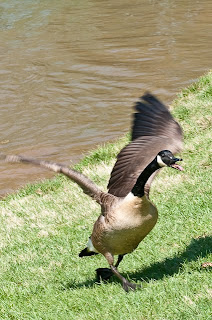 Eddie was like, we have to wait. I was like, why? He said, there are geese. I was like, so? He goes, they're in the way. I said, we can go around them. He said, no we can't. Then he explained how his mom was going to have a canniption if the geese came near her so we had better figure out a way to not be near the geese. I'm not really a big fan of the geese, either. I've had a fight with one here and there while walking through a park or parking my car at my old job. Geese are mean and stubborn. That does not mean I won't walk around them on a path.

The geese started moving so we slowly followed them. They finally made their way off the path so we ran by them. As we came to a stop, we noticed a gazebo-like thing off to the side. We figured that it was a much better place than over the river and through the woods where we'd been. It was a closer, straighter path. It was covered in case of rain. It was small, but it was doable.

We walked down one more path. No geese. Few bugs. Pretty scenery. We decided we could take pictures there. Then a few more bugs appeared and attacked us so we ran away.

A few days later, we magically received the permit back, signed by someone.
Posted by Christina at 2:00 PM