Every summer, Eddie's family has a reunion. In the past, they've had it at a park in New Jersey. I went last year. I ate a veggie burger and watched people play bocci.

This year, one of his cousins hosted it in her backyard. His cousin lives in Ferndale, NY, which is 20 minutes south of Roscoe, home of the Roscoe Diner off Rt. 17, the quick resting point on the way to Oneonta. I know this because I stopped at that diner many times when heading up to college. It's been a while since I'd been up that way, but as soon as we hit Harriman, I was like, Oh, jeez, we're actually here. Not that being there is a bad thing. I was simply having flashbacks of my undergrad days. Or to put it more specifically, daze.

The drawback of the reunion was that at some points we heard people on the duck farm were shooting things. The duck farm was located right next to the house. They share a property line. So I had visions of ducks being shot in slow motion, one duck holding another duck in its feathers, screaming out Why God Why? However, I don't think they were actually shooting the ducks. What good would that do to shoot the merchandise?

What made me feel better was when we were leaving, there were several people there he did not know at all. Yeay! 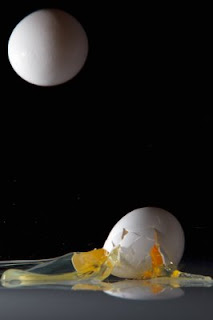 The highlight of the day was the egg toss. He asked if I'd be his partner. I said I would play as long as there was no yelling, no screaming, no sternly instructing, and no pouting when we lost because we were definitely going to lose. This was my first egg toss ever--yes, that's right, ever. I'm sure when I went to day camp there was an egg toss, but I'm also sure that I didn't join. I wasn't much of a joiner when I was young, ugly, shy, and awkward (a quadruple threat! don't be jealous!).

So as everyone got their eggs and lined up, I stood through a rousing lesson of "This is how you catch an egg." I know how to catch an egg. In theory. I understand that an egg cannot hit a hard surface and not crack. I get it. I watched The Mighty Ducks. I know how to "accept the egg".

Meanwhile, his cousin next to us heard me talking about how I wasn't sure how long we'd be in this game, and then was like, Oh man you're in for it. Apparently, he's seen Eddie's competitive side come out. Eddie will be the first to tell you, sure it's only an egg toss, but he wants to win.

When we started playing, he threw the egg and I caught it. Everyone caught it successfully. My line took a step back. Then I yelled to him, You never taught me how to throw the egg! His cousin laughed. He was like, just lob it underhand, don't worry, I'll catch whatever you throw. I threw it. He caught it. Someone did not catch it and was out.

Phew! We were still in the game. I did not make him the first out. Now that that was out of the way I was feeling much better. I simply did not want to be first out.

That feel-good vibe did not last long as Eddie threw me the egg after we stepped back and I totally did not catch it. It's not like I dropped it. I simply didn't even come near catching it. We were out. So was another team. I left my egg in the grass, unsure of what the ettiquette is for dropped eggs. As long as the dog didn't go near it, I was okay with leaving it.

The game went on and on until two teams were left, each partner far across the yard. They both dropped the eggs on the last throw so either they both won or no one won. I'd like to go with no one won. That way, no one really lost either. Or we're all losers. At least we're all on the same page.
Posted by Christina at 3:32 PM