Two Bunnies In The Hamptons

Every year, Shecky's in the Hamptons is my one chance to head out East on the Island and pretend I'm well-off. S, D, T, and I piled into Yolanda (which is apparently a zippy car as T pointed out--I go a lot faster now) and took the hour and some minutes drive out there, finding a sweet parking spot right across the street--last year, S and I parked down a few blocks. We got on line and in no time we were inside the grounds, ready to look at pretty things we would probably not buy and, more importantly, to imbibe in the sweet liquor that was pretty much free. Free! Free! We love free! 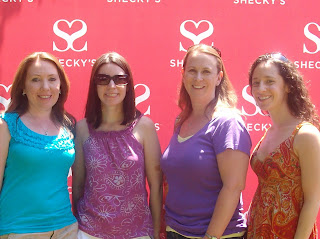 But first, we headed to the bathroom. Which sucks. Porter potties sitting in the sun are gross, even when you're the first to use them. Ew.

Usually, we float around for a while, deciding where to go and what to look at since everything is so glittery and colorful. Jewels. Dresses. Shoes. Books. Beauty products. It's all there. This day was different. We instead signed up for the mixology class sponsored by Cointreau. Then we stood on line to get a mixed drink made with Cointreau that came with its own shaker, and the shaker has a hole for a straw so you can drink out of it. I got the skinny lemonade. Because you know, I'm watching my girlish figure.

Then I asked for the drink and he got a piece of mint caught in the shaker so he had trouble closing it. I was like, yup thanks for that, and we got out of there and met up with D and T who had no trouble with their drinks.

More proof that the hatred of the line dance world towards us is spreading to the world at large.

We headed right into the mixology tent and S and I got caught at the table in the sun so we edged our way back into the shade. Two women arrived later and took the sun table. Heh heh.

The mixology master was very much into the Skinny Lemonade and was in love with Cointreau. He pointed to the four of us and was like, I see some of you are already enjoying it. I think he wanted to steal it from us. He told us to hold up and break the dried rinds in front of us to smell them. Mine? Would not break. So I stood there trying to bend a stupid piece of rind like an idiot while everyone else was snapping and smelling. T and S shouted out that it smelled like oranges. He was like, yes correct!

Then he asked a bunch of questions about alcohol content. S kept answering them by reading the label on the bottle until he caught on. Then he asked, For those of you who are not looking at the bottle, does anyone know.... 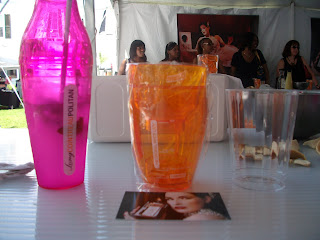 We began to make margaritas. Now we had a different shaker in front of us that had different recipes on it. It did not have a straw hole so we all had plastic cups. We opened our shakers and S's cap went flying off. I was hysterical. Then I did the same thing. Twice. 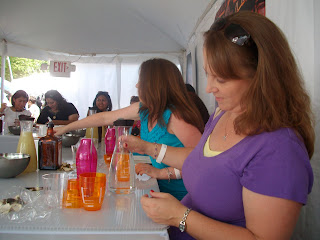 The mixology master insisted that we all shake our shakers at the same time. I don't know why. We all shook. Then we poured. Oh, man, that was a nasty tasting margarita. Not because of the Cointreau, but because I screwed with the recipe, not wanting too much tequila. It was like all lime all the time. Ick. I dumped that right out into the grass. Lots of little bugs got happy from that, I'm sure.

But now the four of us can be bartenders anywhere as long as you order something involving Cointreau and the recipe is on the shaker.

Still sipping on our original drinks, we took a walk around the booths. A lot of flavored water vendors were there. So we got free waters. Then we settled in the shade for a moment where someone had abandoned a goodie bag. D and I were all set to divvy it up when the woman returned for it. Damn. Meanwhile, S and T were tasting the Persecco drinks. I had a sip and did not like it at all. I was quite content with my lemonade.

We went to get our goodie bags which required standing in the sun for a long period of time. The bags were filled to the brim. Everyone got Pop Chips but me so I snacked on what I thought was going to be a Fiber One cereal bar and turned out to be a fake brownie that didn't taste too good. But I was hungry. It sufficed.

S and D took the bags to the car since T and I had new drinks and couldn't carry them out. This is when the bunnies arrived. We were standing in the shade and T was like, don't make eye contact! Neither of us enjoys characters. Neither of us understood why bunnies were there. Ugh, it was horrible. They were ten feet from us and we had no cover. Thankfully they went away. 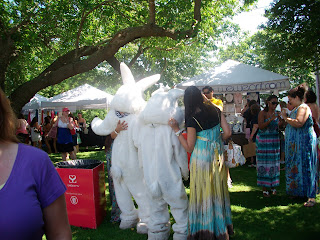 Then S and D came back, S smiling and shoving her phone in my face saying, Look! Look!

She'd found a Montana license plate and had won the license plate game. I was happy for her. But then I thought, Oh no. If she won, then Eddie lost. He had only one more to go. We're still looking for Hawaii.

Next we went on a mission to find water. S wanted plain water. All the water we found was infused with stuff. Then one of the women in a booth suggested she ask the bartenders at one of the bars. I was like, don't wait on line. She was like, really? I was like, just go to the side. The guy nodded when she asked if they had water and soon enough, she had ice cold plain water.

The timing was perfect because we found chairs in the shade and were able to lounge around. 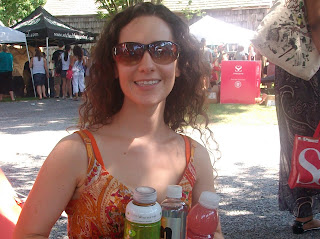 We made a plan to visit a few more booths and then head to eat at Sip and Soda, the place S and I had found last year. We walked because I could not drive.

I had one and 2/3 of a drink and I couldn't drive. Several years ago, I had seven drinks and was perfectly fine. What's happened?

The walk was good. The food was really good. Soon enough, we were headed West once again. And so my life as a rich Hamptonite is over once more until next summer.
Posted by Christina at 8:00 AM