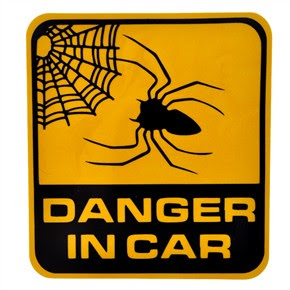 There's a spider living in my Yaris. I find web strands across the dash. I find strands from the seat to the front of the car on the passenger's side.

Once, I found a spider. It was white. I was driving. Eddie was in the passenger side. I was like, It's a spider! Get it! Get it! He took off his shoe and whacked it against the dash in the middle, in front of where the gauges are. Usually, I bring bugs outside of the house instead of killing them. While I'm driving, that's not an option. If anything crawls on me while I'm at the wheel, that car is going to wind up through a wall.

The next day, a spider web, bigger than ever, was in the corner of the dash and the windshield. We may have angered the spider that lives hidden by killing the one that was not hidden.

It's still lurking. I haven't found a large web since the weather has cooled, but I know it's there, waiting, watching, ready to crawl across when I least expect it.
Posted by Christina at 9:34 AM