With an epic push towards reaching goals, creativity and progress revved up immensely this past week. I found the core of my full collection and a way to go about revising it. I read a little, I wrote a lot, and I even researched.

Let me say that again. I researched.

Me. The lazy poet. The lazy writer. She who makes things up because she is also the she who does not do research. She did. Me did. I did!

I workshopped with my artist friend. That lead me to figure out how to set up a new order for my poems and where I need more.

I listened to back episodes of both Golden Walkman Magazine and The Other Stories. Give a listen when you have a moment. I also listened to Two Dope Queens, not that that has anything to do with sabbaticalling other than I had time to listen to it.

I went to the Public Art Fund exhibit at Metro Tech Commons with S. Hank Willis Thomas's The Truth Is I See You stretches out along the walking path. A line of poetry appears in either a conversation or thought bubble attached to a lamppost. Each line is in English on one side and in another language on the other side. The pole has a sign that says the language and how to say the phrase phonetically. Poetry is art. Art is poetry. 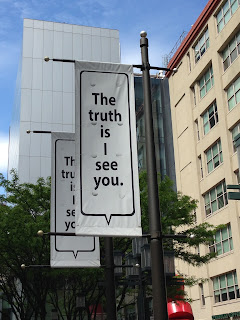 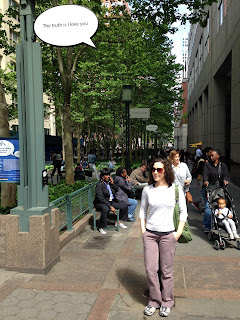 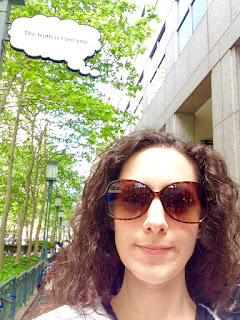 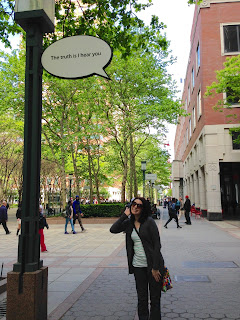 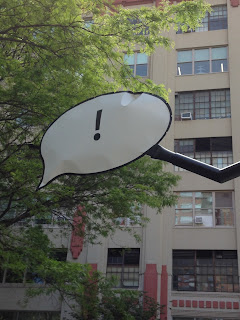 And then there was the everyday art, which is always inspiring. 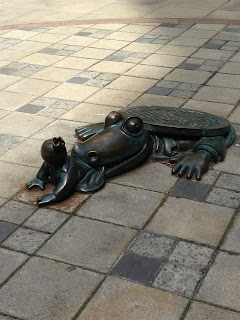 I submitted work to journals. I applied for a blogging gig and a workshop teaching gig. I also began to watch Transcendence to get sci-fi inspired, but it was so horrible that I turned it off. I rarely turn off movies. It was pretty bad.

And since this past Monday was the last day of the Spring semester, my sabbatical is now over. I don't have a final full collection published to show as an outcome. I don't have something that recognizable or tangible. I mean, I have poems. A lot of poems. Those are tangible. But the overall outcome of what I got from sabbatical is not something anyone can hold. The experience, the being in it and doing the everything in it and the savoring the ability to be able to do it, is the best outcome here. Passion for reading -- reignited.  Passion for writing -- reignited. Passion for going out in the world to do lit and art related things -- reignited.

I'm not exhausted or fuming. I'm exhilarated. I'm not saying that returning to teaching will make me exhausted or fuming. I'm saying that the years of teaching, and dealing with all the politics that come with it, had brought me to a brink of sorts. Sabbatical allowed me to decompress, revisit the core of who I am, what I do, and what I'm capable of doing, and now I'm back to good. (Side note: Wasn't there a song in the 90s called Back to Good?)

But for anyone who needs something more concrete than all that, this final week brought me a new best friend. His name is Sinbad. Such an awesome way to end all this. 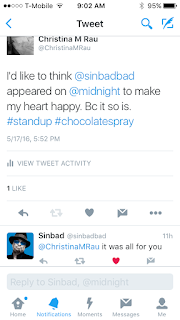 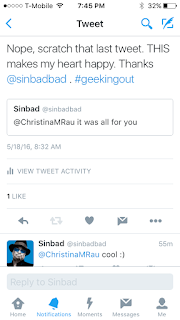