One year when I went to Fresh 102.7 in the Park for a free outdoor summer concert with D and T, we almost melted because it was over 100 degrees even after the sun went down. You know, the type of night when you sit without moving and still sweat. It was gross. Fun but gross.

Eddie and I went to see Train because seeing Train at a smaller venue is the best way to see train. We were at the Hammerstein, not in the general admission stand in a crowd part, but up in the balcony with the ancient seats part. I actually wouldn't mind paying a few dollars more for them to upgrade their seats to be not broken.

With a chill in the air, we walked from Penn to Hammerstein in under three minutes and didn't have very long of a wait outside. As a bonus, we got FREE stuff! We got laminates that said Holiday Jam and had a coupon. We also got bracelets that lit up. The guy handing them out was like, Do you want one?

Want one? I want all the ones! 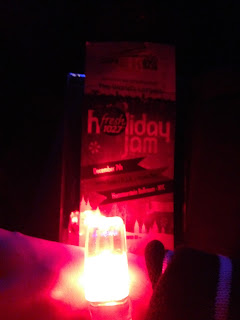 O.A.R. opened the show. There was one guy in the back up band we really enjoyed who was in the spotlight because he's from New York and it was his birthday. We liked him because he was dancing and putting on his own show. A lot of the crowd who was cheering seemed to be fans who travel to see them and they knew every song. We knew some of the songs and the rest were entertaining. 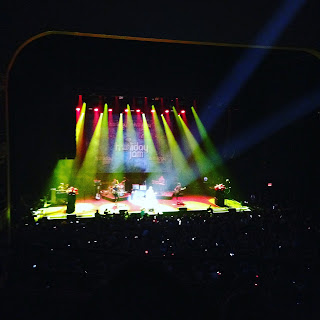 James Bay was up next. We thought it was going to be a little sleepy because he sings "Let It Go," not the song from Frozen, but the one by, well, him, and it's slow. Apparently, we don't know his music very well. He put on quite the upbeat frenetic show and then he sang "Let It Go." Then he covered "Proud Mary" and I kept insisting Tina Turner was going to come out as a surprise guest. She did not. Still, good cover. 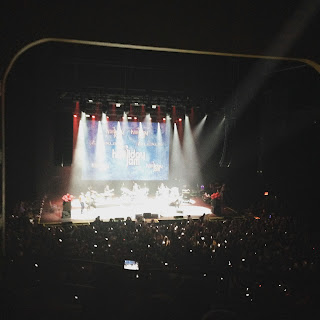 Right after his set was done, a fight broke out in the crowd. Let me say that again: a fight broke out at the Holiday Jam after James Bay. Seriously, know your place, fight-pickers. It was a short fight. It was stupid.

Then it was time for Train. The members of Train are all clearly thankful for being able to play music, and they are clearly having fun. They played mostly known songs and they included the new "Play That Song" that a lot of people already know. Pat Monahan then said that the bassist was going to sing a song. But there was also a special guest! Nope, not Tina Turner. Sorry. But it was Matt Nathanson! So close!They all sang David Bowie's "Pressure" and it was phenomenal. 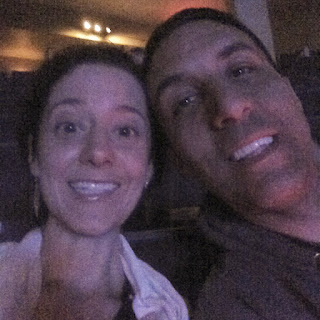 Free stuff. A bonus Nathanson. This is what the holidays are about.

Posted by Christina at 1:24 PM