A warning upon the notion of misrepresentation: when you see articles and blurbs on Time Out New York and such about how you simply need to go to Madison Square Park to witness in person the fantastically fun Gingerbread Village to celebrate the wintery holiday season, and even when you click on said articles and blurbs and view the pretty pictures, do not add it to your Must List. Instead, add it to your If I Want To Waste Hours Of My Time List. In fact, simply add it to no lists. Click away, walk away, build your own gingerbread house.

Flashback: Last year, S and I spent a lovely day learning at the New York Hall of Science while also taking a stroll down Gingerbread Lane which is exactly what it said it was: a lot of gingerbread houses built across a wall of the museum.

Flashforward: S and I stood on line for over an hour in the cold during SantaCon to walk through a gingerbread house that was not real gingerbread nor was it a village.

Village: a group of houses and associated buildings, larger than a hamlet and smaller than a town, situated in a rural area. (Thank you, Bing).

A group. A GROUP of houses. This is one house. 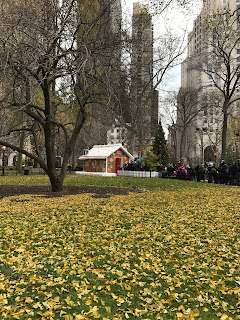 Okay, so it's not a village. But it's a house, right? A gingerbread house.

S was disappointed because it wasn't real gingerbread. Nothing about it was real. Not the ginger, not the bread, and not the icing. I wasn't as let down because I didn't expect it to be real because squirrels and birds would eat it.

I did, however, expect a group of houses because it's supposed to be a village. I thought maybe there would be even cardboard 2-D houses and then one to walk through. Nope, this was it.

We stood on line because we were there already. At least we'd get to delight in whatever they thought the inside of a gingerbread house might hold. As we neared the outside, it was cute. Some decoration was questionable, but for the most part, cute.

We wound around to the front and waited some more.  I went to check the other side to see if there was anything special around the house. There was not. However, there was this pretty tree next to us. 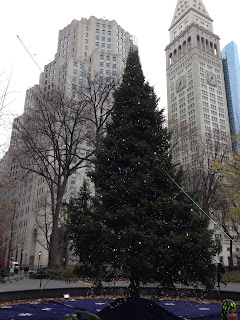 And across from us were where the hammocks have been outside of the Flatiron Building for a while. However, the hammocks were down; I'm guessing because of SantaCon.
Finally, we made it to the front! And then we went inside! And! Then!

You know how when you're a kid, you can take an empty cardboard box and turn it into anything you want? Like in 3rd or 4th grade, or maybe it was 5th, I made a time machine out of a cardboard box that probably once held a refrigerator and we used a real doorknob held on with duct tape (which was a really big deal from me because I didn't know you could just go to a hardware store and buy a doorknob) and on the inside were drawings we made of swans based on a book we'd read and a chair. Maybe S has a better memory of this than I do if she was involved in this project, and I think she was. Anyway, it was a cardboard box we turned into something neat.

Back to the gingerbread house. It was empty. Our cardboard box had more in it than this house. This house had a projector on the ceiling. Instead of furniture made out of gumdrops--even if the gumdrops weren't real!--they had projectors. The guy who pulled back the curtain behind the door to let us in told us that we could stand in front of each projection and move around and the images would move, too.

So that was it? Motion-sensored projections on the walls of a cardboard box?

By now, everyone should know my problem with motion-sensored anything. In general, doors don't open. Just last week, I was at FoodTown. I grabbed a cart and stood in front of the door. It wouldn't open. A woman came up next to me, grabbed a cart, and still, the doors wouldn't open. We both moved back and forth, further away and closer, and they wouldn't open. We expressed our dismay and disbelief until two other women without carts came up behind us and wondered aloud what we were doing. We explained that the doors wouldn't open for us. One of the women walked between us and the doors opened. I exclaimed, You have the magic touch! She didn't answer because, you know, me, so we all shuffled into the store quickly before the doors closed again.

Also, the sensor light on my garage has not been working at all. It comes on when you swing the car really wide across the street to come into the driveway. Other than that, it doesn't detect anything, and I wind up parking in the dark where the raccoons may lie in wait.

So back to the gingerbread. I spent a few minutes slinking back and forth in front of the projections, not getting much of a response, while right behind me, the children were jumping and delighting in cartoonish glee. S was not pleased, either.

There's also a fireplace animation that shows photos people have taken and tagged with #holidayheritage. I have no idea what the hell that hashtag has to do with what we were doing.

When we came outside, we took a cute picture without the guard. 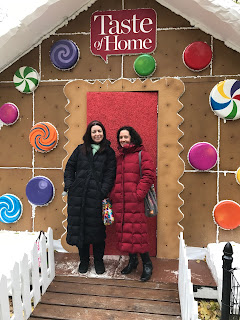 And then people were asking if it was fun and if it was worth it and S was like, if you want to waste your afternoon, and I was like, well there are cute interactive animations if you like that kind of thing but the line is too long, and S was like, No don't do it, again.

Then we went to Yamamama to meet up with LH and her sister, and that made it all better. If you plan to go next year to the gingerbread village, you can simply go to Yamamama and look at the lone standing fake gingerbread house from across the street.

To end my day on a fabulous note, I saw this on my way home. 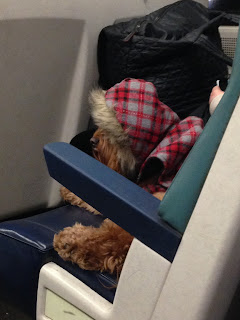