I don't know Harry Potter. Trivia this month was all about Harry Potter, and I haven't read or seen a movie in more than a few years. I did what I do best concerning all kinds of trivia: I put the team together. This month's team was SD and B, my officemates. We didn't do so hot during movie trivia, but in not coming in last, we had a glimmer of hope here. Also, SD has listened to the books several times during long car rides, so this was all her wheelhouse.

The night before trivia, I went onto Goodreads and took all the Harry Potter quizzes I could find. I earned 2 out of 10 and 7 out of 20. Things were not looking too swell for me, so I did what any teacher nerd would do: I took notes. Then, because I'm really a teacher nerd, I made a study guide from my notes. 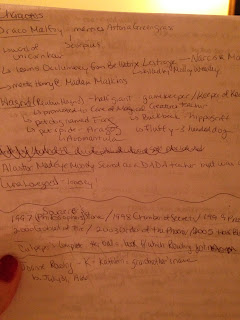 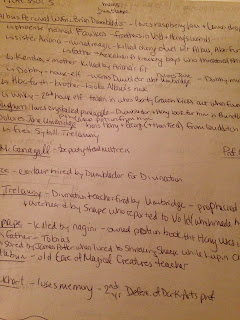 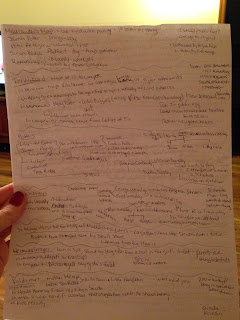 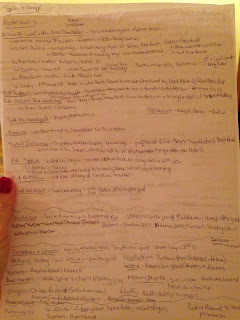 I went to trivia early the next night to get in some studying time. B was already there, studying from her own notes that she took while re-watching the movies. That meant SD had books covered, B had movies, and I had random notes that I couldn't remember. Sweet. SD showed up soon after and we were all ready, really psyched about our chances. Until two teams walked in dressed in Harry Potter attire. Then I pointed out that the rest of the teams were quite a bit younger than we are, meaning they probably had more Harry Potter in their lives during more impressionable times. As trivia began and we were called upon to show our answers rather quickly, I suggested that perhaps our team should get more time because we were older, and therefore, we have more stuff in our brains to sift through to get to the answer. That did not happen mostly because I didn't suggest it to anyone other than my teammates, who by the way concurred.

There was a written portion, again, and something about being able to write answers down for a lot of questions all at once speaks to me more than answering one at a time. Not that I knew any of the answers. I tried, though, by doing things like pointing at a quote and saying things like, That sounds like something Dumbledore would say. See? Helpful.

There were two questions that related directly to things I had written down and discussed with my team right before starting. So all that study guide making had come in handy for two solid points.