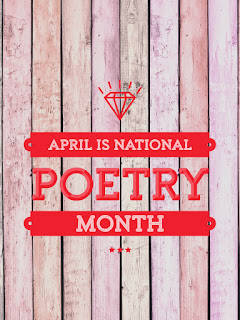 National Poetry Month has kept me busy, especially this past week.

It all started with an afternoon poetry reading on Sunday. My workshop friend gave her final public musical performance, so I went along to listen. There were some main featured poets who read and also an open mic. There was also an interpretive dance to "Eye of the Tiger." Whole song. Start to finish. Yep, that happened. It was pretty amazing.

Monday night I hosted the Poets In Nassau reading Writers Raise A Glass at Turn of the Corkscrew. It's usually a cross-genre reading, but since April is poetry month, I slotted five poets and had an open mic. I asked all the poets and open mic readers to read at least one poem by someone else. I loved how it went, so I'm making that a thing for open mic moving forward. Everyone has to read a little something by someone else. We get to see other people's reading  habits. I've been posted Suggested Poems For Today on the Poets In Nassau group page on FB, and I'm going to keep doing it because I like it and others seem to like it, too.

Wednesday morning was workshop day where I gushed to my friend about her performance. We then did some poetry workshopping, which led me to revise a bunch of poems, and write some more. Then that night, I participated in a Beat Voices reading. I read a poem by Diane DiPrima and a poem by Anne Waldman. Then I read two of my own "beat" poems that I wrote probably sixteen years ago when I thought I was beat. They were okay. They weren't bad, but they weren't great. Still, that's the only beat stuff I have, so it worked. I found out at that reading that the music stand I'd donated to Sip This is kinda broken. Actually, thinking about it now, it might not have been the stand I donated. Perhaps someone took the one I donated and replaced it with this one because this one was wobbly and moved on its own. Whatever the case, it was a fun night of Beatific poetry, even though the host's camera died. I took moody pics, though, and shared with him to commemorate the event.
Thursday I found myself and Eddie at Tribeca Film Festival. Okay, this has nothing to do with poetry month, but April is also TFF month. We went to see a group of shorts they call New York Then, which included his cousin's film Mulberry. I enjoyed all of them for the most part. The thing I miss most about going to TFF every year and seeing five films is being inspired. The buzz around the festival motivates me to write. Coming in closely at second of all the things I miss is the low-price tickets. They aren't so cheap anymore, which is why I haven't been going.

The event-going ended on Saturday where I participated on a panel for Reading Poetry Aloud. There were three of us on the panel. There were three people in the audience. So we wound up having an informal chat about readings and hosting and how to navigate the local scene and how groups can support each other. I got an awesome sticky-note pad for my participation, and given that I love office supplies, I was elated. Eddie also loves office supplies, but this is mine, all mine.

In the interim of going out, I did some necessary staying-in work. I finished reading a non-fiction essay collection, and began both a novel and a poetry collection. Then I read through some old and new selections in  Flapperhouse, Electric Literature, The Toast, Booth, Okey-Panky, McSweeney's and Queen Mob's Tea House. I listened to one more episode This Podcast Will Change Your Life, and then decided it's not quite what I want to listen to. The early episodes are difficult to hear, and I'm not sure if the quality gets better, but I don't want to be challenged to listen to something, especially when I'm driving, which is when I do most of my listening. I also listened to Catapult and PoemTalk, both of which had new episodes.

The most blogging I did was writing this. Instead, I worked more on my website, which is now fully functional. Save the blogging. Obviously, I'm still here to blog. Giving it a few more weeks. Or months. Change is bad!

I wrote a lot this week. I usually write during readings. It's not rude. I encourage everyone to do it. I revised a lot, too. Then I exchanged feedback with my online poetry workshop. That led to some submitting, both my full manuscript and individual poems.

On the business side, I updated my submission tracking sheets and my email list. I continued to plan a few readings and got myself invited to another reading someone else runs.

All this activity means I'm killin' it sabbatical-wise. I'm also very tired, but it's the good kind of tire. It's the poetic kind of tired. It's the freelance writer kind of tired. Plus with all this running around, Project Pants Fit should see some benefits. I'm using today to unwind a bit, maybe read a little, because this upcoming week is just as eventful. I figure I'll be going out a lot until the end of April when we poets all get to take a collective breath.
Posted by Christina at 11:23 AM