I don't own a Chevy, but Eddie does, yet after our experience with the good folks over at Bical charging me a gazillion dollars for maintainance without first running it by me, we're not looking to do further business with them.  Instead of sending information to Eddie, they sent me this: 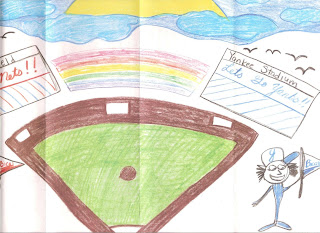 Then using some cross between Comic Sans and Mufferaw typeface, the sales manager typed on the back saying he was using his Son's drawing to illustrate how I could expect to win with them.  They are willing to give me $6740 for my 2002 Saturn.  They treat their customers like champions.  Then there's an another black and white line drawing at the bottom of a mom, dad, sister, brother, ungendered baby, two dogs, and two cats.

You know, my worst nightmare.

So a few things:

1. Why is son capitalized? Did he name his son Son?

2. How old is his son?  Either he's a five-year-old artistic genius or a thirteen-year-old who probably doesn't want his drawing from the refrigerator sent out to the public.

3. I don't like children, so why is a child's drawing supposed to make me buy a car?

4. I don't watch baseball, so why is a drawing of baseball going to entice me to buy a car?

5. What the hell does baseball have to do with cars?

6. Font that looks like handwriting shouldn't be in professional correspondence; I don't need another company telling me that we're family (listen up, Sprint!).

7. I own a Toyota, having traded in the Saturn when it almost exploded. Would you have paid me 6 grand for a car on the verge of exploding?  I don't think so.

A kind suggestion to Bical--nothing you do is right, so stop it.  Thank you.