A Literary Day: A Tale Of Two Jameses

After a very long day spent mostly in the car traveling to Liberty and back again for a wake, I was zombie-ish at work, which made my duty to be the go-to-point-person for getting the visiting poet on his way home my driving force to stay at work without falling asleep.  Arriving at the room for the reading after teaching my two morning classes, I found no set up for the reading.  So I stalked back and forth on the first floor, thinking I'd possibly find "someone who knew something."  In my third stalk, I found my office open and my office mate obviously just getting in, so instead of letting her settle, I pounced--there's no set up there's no set up!  Then I added, I know you just got here so feel free to settle in and not jump.  Used to my craze, she got up and started moving furniture with me.

This is how you know the poet you've invited is also simply a nice human being.  He arrived with two other people on our committee and he started moving furniture with us.  Yeah, that's right.  Now that's someone I can get behind.  Also why I'm a huge fan now?  He didn't read.  He recited.  From memory.  Like said everything that was on the page without ever looking at the page.  He recited his own work and then, another sign of a great poet, he recited the work of other poets.  Yeah, that's right.  He's that kind of guy.

His reading fell right into my schedule when I  need to eat since I eat every two hours and then sometimes in between.  So I sat in the back on a table next to some of my collegues and opened my salad.  Then I realized two things:

1. I had very loud lettuce.

2. I was in mirror-range, so everyone in front of me could see me eating in the reflection of the mirror that was behind the podium.

I had a choice to make.  I could eat, causing a ruckus both in vision and in audio, or I could not eat, causing a ruckus by passing out.  I already had the hunger shakes, so I decided to eat but chew only every seven seconds, and in chewing, I would take only very small bites.  I caught a glimpse of myself in the mirror, and I looked like a crazy person, so really, what I was improving in the sound department I was making worse in the visual field.

Nothing I did distracted James Arthur from his smiling delivery of poems.   The students really enjoyed his reading as well as us faculty.  At the end, he signed books and chatted with ease.  My colleague asked if I'd take care of getting him on his way home, and having finished my salad as slowly and awkwardly as possible, I was no longer at risk of passing out, so I said I'd take care of it.

I offered a bit of praise to James, which he gracefully accepted.  Then I gave him the choice to take the train from the station close by which I would get lost going to and would be a longer ride, or he could take a twenty minute drive to a closer station that's in my home neighborhood.  He chose the latter, and so began The Car Ride of Babel.

To avoid any chance of an awkward silence, I did what I do best: I talked too much about myself, laughed at my own jokes, and asked probing questions that he probably already answered during Q&A while I'd been furiously finishing my loud lettuce salad.

Proving that he's the kind of human being the world needs more of, he answered questions, asked questions, and held the conversation all the way to the station.  I parked and walked him to the platform while informing him of the texting miracle of CooCoo to check train times.  As soon as I walked into the waiting room to see when the next train was, we saw it flash that it was coming in right now as we heard it above beeping to signal the doors would close.   He said, I think that's it.  I said, I think you're right.  So we ran outside, we hugged as if we were old friends (which, contrary to what it may seem, was the most natural and unawkward part of this whole thing), and he ran upstairs with me calling after him, If it's not the right one or you don't make it, just come back down!

Thankfully for both of us, he made it on the train.  Either that, or he disappeared into thin air.

Because Eddie and I had been driving upstate and back with his mom and aunt on the day that celebrated the anniversary of our "being an official couple" for three years, we'd not done anything to celebrate except announce it in the car so that his mom and aunt would say nice things to us.  We'd already had plans to go to Brooklyn a few days later for his cousin's book signing, so we turned that into a date.  Instead of eating too early at home, driving in traffic, just making it in time, and then starving because we'd eaten too early, we went in before dinner time so we could eat at a restaurant.  We went to where we'd had one of our first dates for some Italian food.  Italian restaurants are like old Italian people in that they give you way too much food.  I'd gotten capellini with chicken and crushed tomatoes and it came in a gigantic ceramic bowl bigger than my head.  Eddie got chicken francese and it came with about a pound of mini potatoes.

Eddie said we'd timed it out perfectly because he could see the time on the thermostat next to our table (and it took every ounce of willpower we had combined to not screw around with it during our meal).  When the dessert menu came, we figured we didn't have time, so we got the check and left.


Outside, we checked his phone for messages and saw that the clock on the thermostat was about a half hour off and we were way early.  That meant it was time to get dessert, so we went to the frozen yogurt place first for me and then to Carvel for him. This was shaping up to be my kind of date.  Froyo is amazing, especially when you can get Blueberry Acai flavor.  Yeah, that's right.  Antioxidant infused froyo!  I ordered a small.  When we walked out to go to Carvel, we both realized either it wasn't a small, or they must serve their large by handing over a gallon of the stuff. 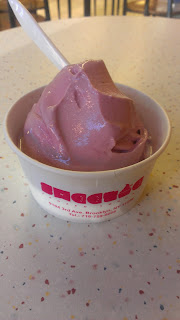 It didn't matter. After Eddie got his vanilla softserve in a cone, we had no problem devouring our dessert. 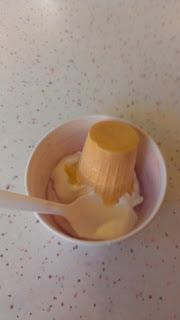 And then we were off to The Bookmark Shoppe, a small independent bookstore that touts readings and book signings with the likes of Wendy Williams, Nia Vardalos, and James McAllen.

We were there to see James McAllen read from Split Rock Road. I'd read it (reviewed it on Goodreads, in fact). Eddie plans to read it. We arrived first because we're always the first to arrive everywhere. Not long after, lots of people arrived. I liked the story he read. I enjoyed his Q&A session; he talked mostly about the process of writing and creating. We got our book signed. Then we listened to a longer story from the collection, one that was a bit more depressing than the first, but that's the overall tone of the book, anyway, so it fit in nicely.

On the car ride home, I pointed out to Eddie that he accidentally took me on my kind of date: froyo followed by a literary event. He said I'm easy to make happy. Food and books. Yup, that's what got me through the day.
Posted by Christina at 9:51 AM