Thanks, Toronto: The Epilogue

We were out of our hotel in the 6 AM hour. We got to the airport super early. No lines. Security was a little confusing because we were suddenly going through it without even realizing it. Also, there were no signs and the people were telling us Go To Line 1 and there wasn't any line so Line 1 was hard to find considering it didn't exist. We found kiosks that took our pictures and scanned our passports and asked us if we had anything to declare. Then we found our gate, which was the furthest from anything in the airport. We walked all the way back to get some food. We found the one main food place, and I found out that they had bagels, so Eddie got one and I got fruit and a yogurt, and the cashier let us unload our Canadian money and then pay the 71 cent difference with our credit card.

We ate slowly and then walked all the way back to the gate. Then we saw that the gate had changed, so we walked all the way across the airport again. This is why I didn't mind eating the crepes and the ice cream the day before. It all burns off when you travel.

Our gate was beyond glass doors that would not open until 45 minutes before our flight, so we sat in the main corridor. I read while Eddie talked to me as I read after he told me, you should read your book. The doors eventually opened and we found different seats near the window to watch the planes. I did some stretching and he told me I looked like a weirdo.
Then we found our friend. Our friend was a young guy with a giant blonde afro who we'd seen on the street our first day in town. He'd been shirtless, pushing a bike, singing to himself. We saw him a few times that day in different parts of town, always shirtless, never actually riding his bike, bobbing to his own tunes. Here in the airport, he was wearing a shirt and had no bike. He also had no bag. He sat down and bobbed his head and shimmied his shoulders to what I assume was a song he was listening to--he had in earbuds. Then he got up, walked around, jostling and jiving, singing to himself. Then he sat down and continued the same thing. This went on for at least an hour. And I'm the weirdo.

I was slightly surprised that no one said anything to him. I mean, we were in an airport, and this behavior wasn't exactly "normal." But nope, no one cared. I figured he either had ADD or was working out the nerves of flying. I don't think he wound up on our plane.

We got snacks on the plane! 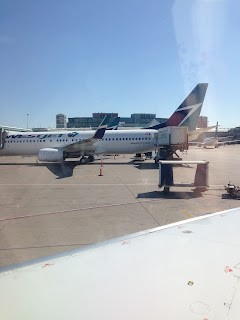 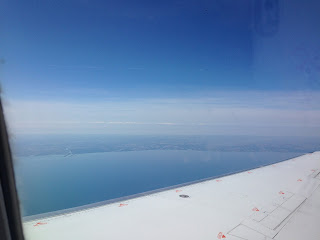 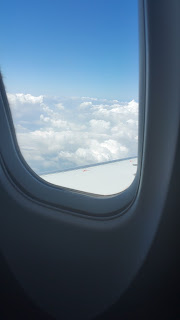 The most important thing that happened at the airport was that Eddie got his passport stamped. Yeay! He's legitimately international!

We got home pretty quickly, and then waited for airport transportation to pick us up. When the van arrived, the driver said to Eddie, They told me it was one passenger. As if we were all going to decide to leave me there since they told him something wrong. Then we drove home and I looked like this: 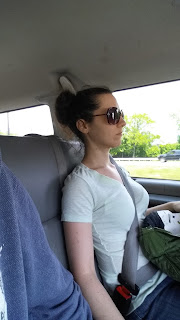 In case you can't tell, this is me clenching my jaw and gripping first the seat and then Eddie's forearm as the driver careened down the Belt Parkway, asking us maybe 30 times how to get home. Dude, GPS. Also, don't drive like a maniac. I practically shoved Eddie out of the way and jumped out of the van when we pulled up to the house. I was alive! And Canada had been swell.
Posted by Christina at 10:00 AM

Email ThisBlogThis!Share to TwitterShare to FacebookShare to Pinterest
Labels: Eddie, On Holiday