Teddy Roosevelt was a great citizen, soldier, and president, and if he were alive today, I'd vote for him for eternity.  Plus, he had a really neat house.  It's not air conditioned and there are a lot of animal heads and rugs everywhere, but for the most part, it's neat.  It's also a whopping ten dollars.  However, if you don't want to see the steamy inside of Roosevelt's actual digs (now that sounds dirty), you can walk the grounds of Sagamore Hill and check out the Orchard house for free.  That's right. FREE. 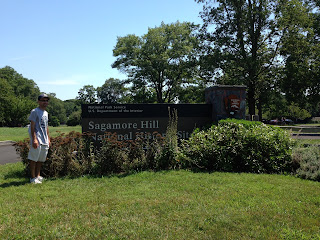 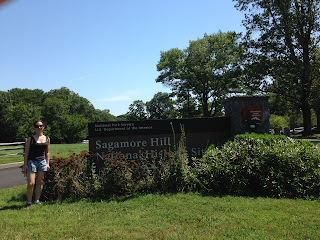 My brother and I first went on the nature trail that led us through some steep hills and buggy terrain.  Buggy for him.  He spent most of the time swatting at his ear.  He was wearing bug spray.  I spent no time swatting down the hill and was wearing none.  The path led to an incredible beach.  We walked over the bridge thingie that had the shells of mussels washed up in the mud under it--indicating just how high high tide can be--and onto the sandy part of the beach that quickly became rocks because all North Shore beaches are rocky.  Because the temperature for our day-tripping adventures always soars, the warm wind felt really good and we stood there for a while, knowing that back in the forest, there would be no breeze. 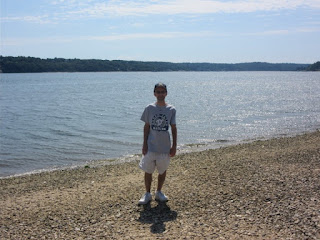 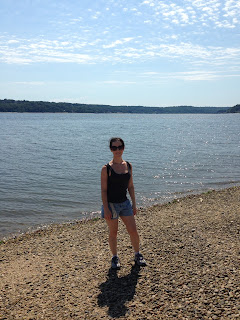 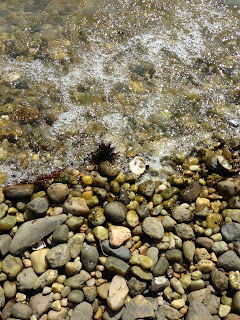 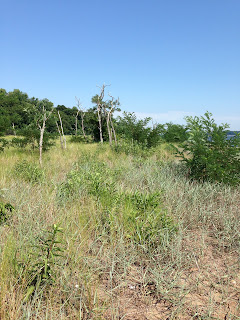 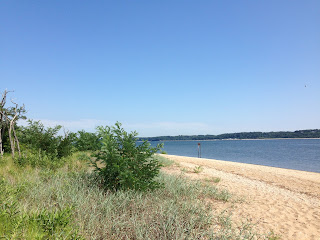 Back in the forest, there was no breeze.  Uphill, the bugs started to get to my ears this time.  Probably because I was sweating profusely, which is a now a standard part of hanging out with the sibling.  I sweat a lot.  And uphill on a steep incline encourages it.  Plus, the two of us don't know how to walk casually, so we were kinda sprint-walking through the woods.  Even so, we noted the really tall trees and I saw pretty butterflies all over.
At the top of the steepness is where the Orchard house is.  It has been converted into a museum about Teddy Roosevelt's life and career, and it has Before and After photos of the restoration of his actual house.  This building is air conditioned.  Ahhhhhhh.  A/C. 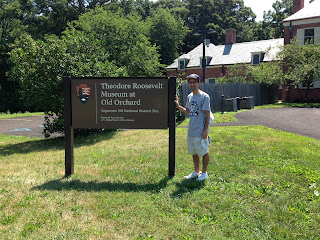 After that, we walked across and down the pathways to find some of the smaller structures like a chicken house that had tools in it instead of chickens.  We also saw a windmill.  Passing his house before our tour started, we followed the map to a trail that would take us to the tennis courts.  At the beginning of the path was  huge sign that advised KNOW YOUR ENEMY with photos of ticks.  Ugh.  We decided to tempt tick fate and dove into the woods, not knowing how far we'd be going because the map was not to scale and the grounds are adjacent to actual houses and figuring out private residences versus Sagamore Hill was tricky. 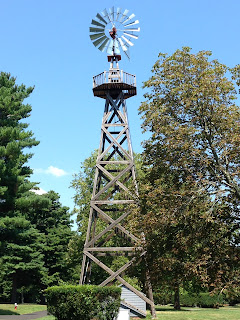 Thinking the whole time this can't be right, we came to the bottom of a hill.  You see, the thing about Sagamore Hill is that it's not just one hill.  It's many.  And every time you walk down one, you realize at the bottom that you have to walk back up.  It was a workout of a day.  PLUS we got to play tennis.  Because we found the tennis court.  Which means we found a sign that says This Used To Be A Tennis Court And It's Now Overgrown With Plants.  I'm paraphrasing, but that is basically what it said.  Ohhh, so it's not an actual tennis court. 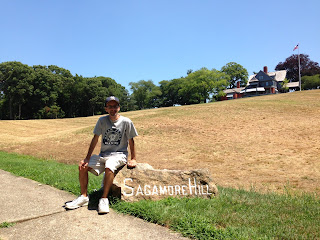 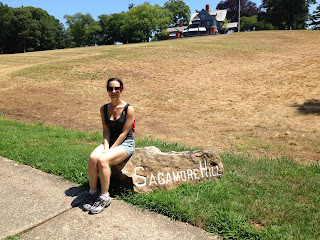 Uphill we went and found the pet cemetery where several dogs and horses had been buried.  We then found a bench and took a load off while waiting for our tour of the house.  As the time approached, we sat on the rocking chairs on the porch.  Then we stood up to let old people sit down, and instead some kids sat down. 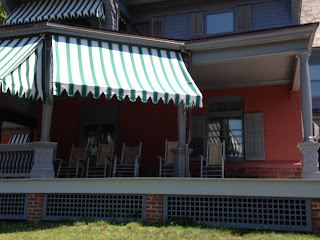 Our tour began with a volunteer who told us it was her first tour.  Yeay for her!  She was nervous and promised to find out any answers to questions that she was not sure of.  However, she knew a whole lot of stuff and lots of gossip. We checked out rooms with the aforementioned animal heads and walked through small halls and staircases.  We learned about TR's family and the rules of the house (dress up for dinner and don't be late! otherwise you eat in the kitchen!).
Then she was telling us some tales of his oldest daughter Alice when she got stuck on a name--Henry...Henry...Henry....

My brother the history teacher piped up: Henry Cabot Lodge?

I pointed to my brother and he raised his hand and she said, Thank you, my friend! Yes! Henry Cabot Lodge!

Fast forward to the final top floor where the guest bedroom is.  She asked from across the hallway, Where's my friend? Guess who stayed there!

Yes! Yes! And what did Henry Cabot Lodge say when he stayed here?

The lady in front of my thought that was the most hilarious thing she'd ever heard.  Henry Cabot Lodge apparently said that he hated staying in that room because the house was too noisy with lots of people always running around on the uncarpeted floor.  One of the other women on the tour remarked that the carpet looked new since the last time she'd visited, and the guide said they'd put new carpet down during the restoration. I asked my brother why you would come here twice since the history stays the same.

The tour finished with another woman behind me telling me to tell the guide to slow down.  I don't know why I was in charge of that, so I didn't tell her to slow down because the tour was over and the next group was already in the house.  Tours are limited to 14 people, so slowing down really isn't an option.

On the way out, the guide thanked her new friend, my brother, and I remarked that you can always rely on a history teacher.

After we ate lunch on a bench, we headed out to West Egg.  One of my poems appears in a new anthology from Silver Birch Press called, simply, The Great Gatsby Anthology, and the press is doing writer profiles with photos of the writers with the book.  Since I'm local to Gatsby's locale, I figured taking a picture from West Egg looking over the water into East Egg would be great.
For shame, Great Neck and King's Point, for shame!  There's basically no way to get to the water.  You can't pull your car over and you can't go into the parks unless you're a resident.  I mean, it's a park.  It's nature.  I'll pay five bucks for parking. For shame!  Great Neck?  You ain't so great.

Plan B, we headed over to a park my brother knew about that we were allowed to enter even though we are lowly plebians, and we found a hill that overlooks Manhasset Bay, kinda.  Like, it's in the background through some foliage.  Okay, a lot of foliage.  But we made it after circling through and around each Egg.

My brother mentioned that he should  have brought some jazz along to listen to on the ride.  Instead, we'd been listening to Billy Joel, and that's pretty much as Long Island as you can get.  So we listened to more of him on the way back all the way through the Valley of Ashes.
Posted by Christina at 12:58 PM