Avengers, FAO, and More In Humidity

Big city summer plans, just in time for humidity so thick that the air is eatable and every street in NYC has a different smell and in this context, it's smell with a negative connotation. On the upside, July days like that offer the opportunity to play Name That Stench or Who Smells Like That?  However, S and I did not play those games.  We wandered through odor after odor, from midtown to uptown to across town and back. 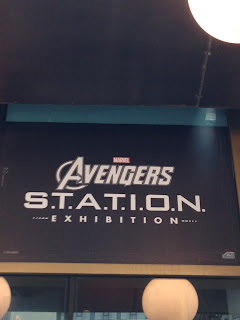 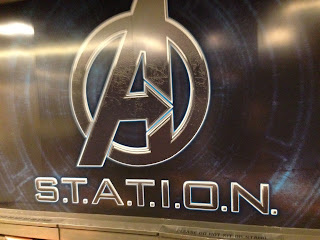 The Avengers exhibit at Discovery Times Square  promises to be an interactive fun-filled time.  For only $27 a person!  Not for us, though.  I'd won tickets from one of LIRR's Twitter contests (I was one of three who entered, so "win" here is subjective), so we went for free.  And I'm really happy I didn't have to pay $27 dollars because the exhibit was only semi-interactive.  And there were a lot of rules like don't eat anything, don't drink anything, and don't take any pictures.  And so we didn't do any of that. 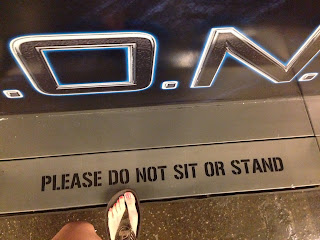 We fully participated in the interactive portions.  Before that, though, we were ushered into a room to watch video about the different agents of SHEILD, but for some reason, neither of us could see the screens very well.  We could see the ones across and upside down from us and each other's from the side, but not the ones right in front of us.  I thought that something was going to jump out at us at some point or the room might fill with fake smoke or flashing lights.  None of that happened.

We tested our physical and mental abilities against those of Captain America.  We were both worse than Captain America in reflexes and grip strength, and I was much worse in grip strength than S, but we were pretty even in arm-pedaling (I don't know what the test was for--we had to pedal with our arms like patients in Physical Therapy do).  Also, there was an activity that tested our reaction to pictures like puppies and evil criminals by reading our skin and pulse, and we both sort of flatlined.  Finally, for no real reason, we both stepped on the interactive scale and got weighed and measured, though I'm not sure why we needed to do that since we know Captain America is like 6 feet tall and we are not.

The Hulk room showed how Bruce Banner's brain is different from the Hulk's brain.  Spoiler alert: The Hulk's brain is green.  At least that's what the visual was, and we could click on touch screens to read the fake science of it all and look at fake microscopes to see fake differences between Banner's blood and Hulk's blood, but the most exciting thing for us in that room was realizing we were on a security camera and figuring out where the camera was so we could wave. I would have expected some sort of jump test or punch test.

The Thor room showed what seemed to be a hologram of his hammer.  S asked me, Does he not have a real hammer and it just appears like that?  I answered, No, he has an actual hammer.  So the hologram was lost on both of us as were the three screens of fake planets and exactly what we were supposed to do with them. And as we passed by the costumes--and we saw a lot of real costumes which is kinda cool--I realized that I actually know a lot about Thor, or at least more than S knew.  I was all about Loki and evil and brotherhood and the aforementioned non-hologram hammer.  Impressive, I know.

The Iron Man room was a nice way to end things because it was interactive again.  First, you can make a fake element by mixing real elements in Tony Stark's lab.  Mine came out to be something like Faronium.  Basically, they take whatever last name you give them at the beginning for your Agent ID Card (oh, yeah, we were supposed to be agents in training) and they add -ium to it to make the fake element.  Then we stood in front of green screens and got to see what we'd look like in the Iron Man suit.  That was kinda cool because we could fly and shoot things by moving our arms.  Mostly, however, we made Iron Man really musical by flapping our arms all line-dance-like.  We also got to aim at things with our eye balls and control a program by blinking, but for some reason, my blinking did not work.  Finally, we could control the Iron Man arm by putting our own hands over a sensor and moving it so that the arm would do the same thing.  It kind of worked.

And that was it.  Since we couldn't take any pictures inside, we did our best super hero poses outside. 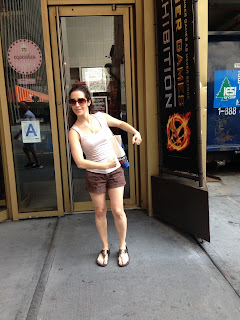 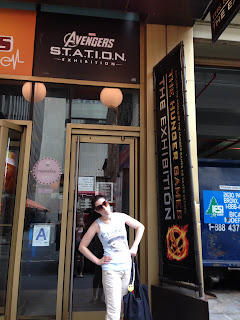 We took a walk to Central Park and found our way to FAO, which is closing for now.  I'd never been there before, but it was pretty much what I'd expected based on what I've seen in movies.  Toys everywhere.  A section devoted to candy.  We got macarons in the end, but first we played The Big Piano. 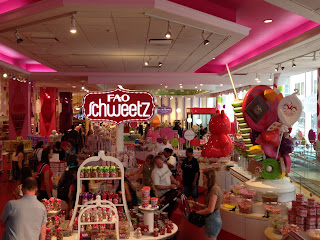 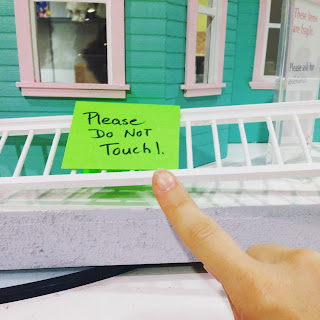 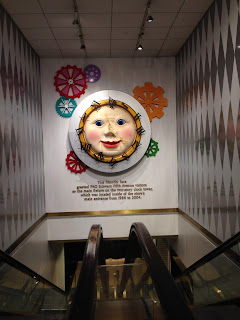 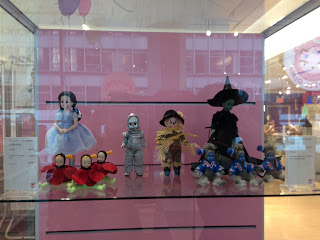 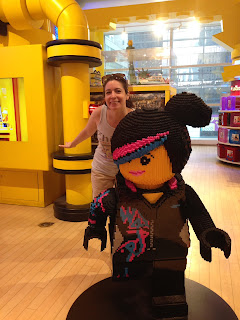 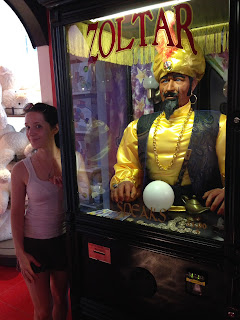 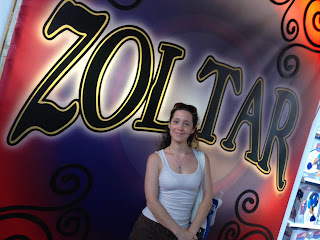 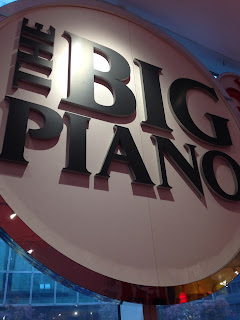 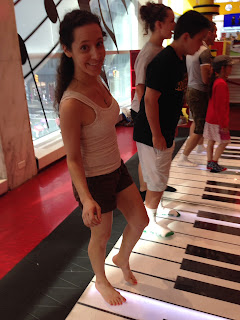 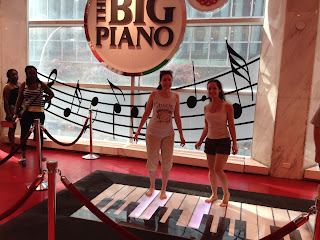 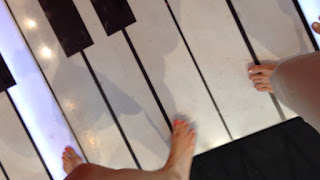 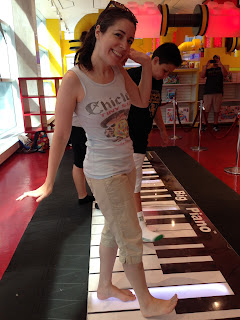 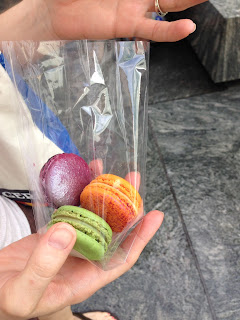 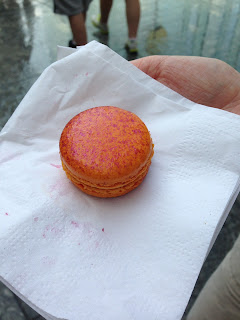 We hadn't actually planned on playing The Big Piano, so we had to do it barefoot because we had no socks.  As S said, in this situation, we're the gross ones.  Since we'd been walking all over Manhattan in flip flops and it was raining on and off so that there was mystery moisture pooling at every curb, I'd already developed a strong case of city foot anyway, so it didn't matter to me.

From there, we went off to Koreatown so S could get the dish she likes, and the women in the restaurant supplied us with super tall glasses of ice water while we waited.  This glass of water was much needed as I was pretty sure I was going to keel over from the heat. When we left, I realized that I needed a bathroom because of the ice water and the previous bottle of water I'd gotten on our walk (from the 7-11 in which there were two police officers, one of whom called me "ma'am" as I let them go ahead of me.  because I'm clearly an old lady) and the closest bathroom was a public bathroom.  Now I've seen bathrooms in parks, but this was midtown.  Was this really something I should be doing?  I braved it since the other one I could think of would be in Penn, and since I'd decided to walk back to Bryant Park for their Word For Word poetry series, I couldn't see going the few blocks in the wrong direction when this bathroom was right here.

It was clean!  Phew!

It also had these.  I don't tend to take pictures inside of bathrooms, but I had to.  Can someone tell me what these are please? 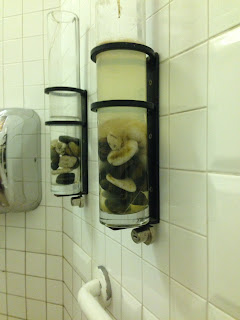 With S pointing me in the right direction, I headed off to the Bryant Park Reading Room as she headed home to bake.  Sitting in the park offered me some time to relax and write down some ideas that have been floating around.  I usually write when I go to poetry readings.  I'm usually inspired.  This was not exactly inspiring.  The theme was supposed to be humor, I think, but I didn't think the poems the first guy was reading were funny.  He referred to genitals a lot, and then he cursed a bit.  It was not my thing. But then Tony Hoagland took the mic.  I'm a fan.  Every time he has an article in The  Writer's Chronicle, I dive in and read through and cut it out and save it.  Some times I assign it to my poetry classes.  I've read two of his collections (gave them 3 stars each on Goodreads!), so I was looking forward to this.  During his reading, I don't know if he's changed his style or content, but I realized that I wasn't enjoying it.  I left after he read, opting out of listening to the third poet.  It was time to go home and take a long shower, getting rid of the city foot any other maladies I may have picked up on such a soupy smelly day.  Soupy smelly days are the best.
Posted by Christina at 6:00 AM