The year is 1922.  At the height of prohibition in Chicago, a mob war was brewing between the South Side Gangsters and the Northern Mob Outfit.  The two factions are planning to meet up at The Grand Gatsby Speakeasy to discuss the future of underground casinos...but not everyone may make it out alive. So don't be a pikah.  Stay outta the clink, get all dolled up, and come out for a night that's sure to be the cat's meow.

And so began the great murder mystery dinner party that S had gifted to me at least five years ago.  After years in the making, my house transformed into a speakeasy owned by Hal Sapone aka Eddie, called The Grand Gatsby (no, not The Great Gatsby.  That's Fitzgerald's speakeasy).

What speakeasy is complete without a little decoration? 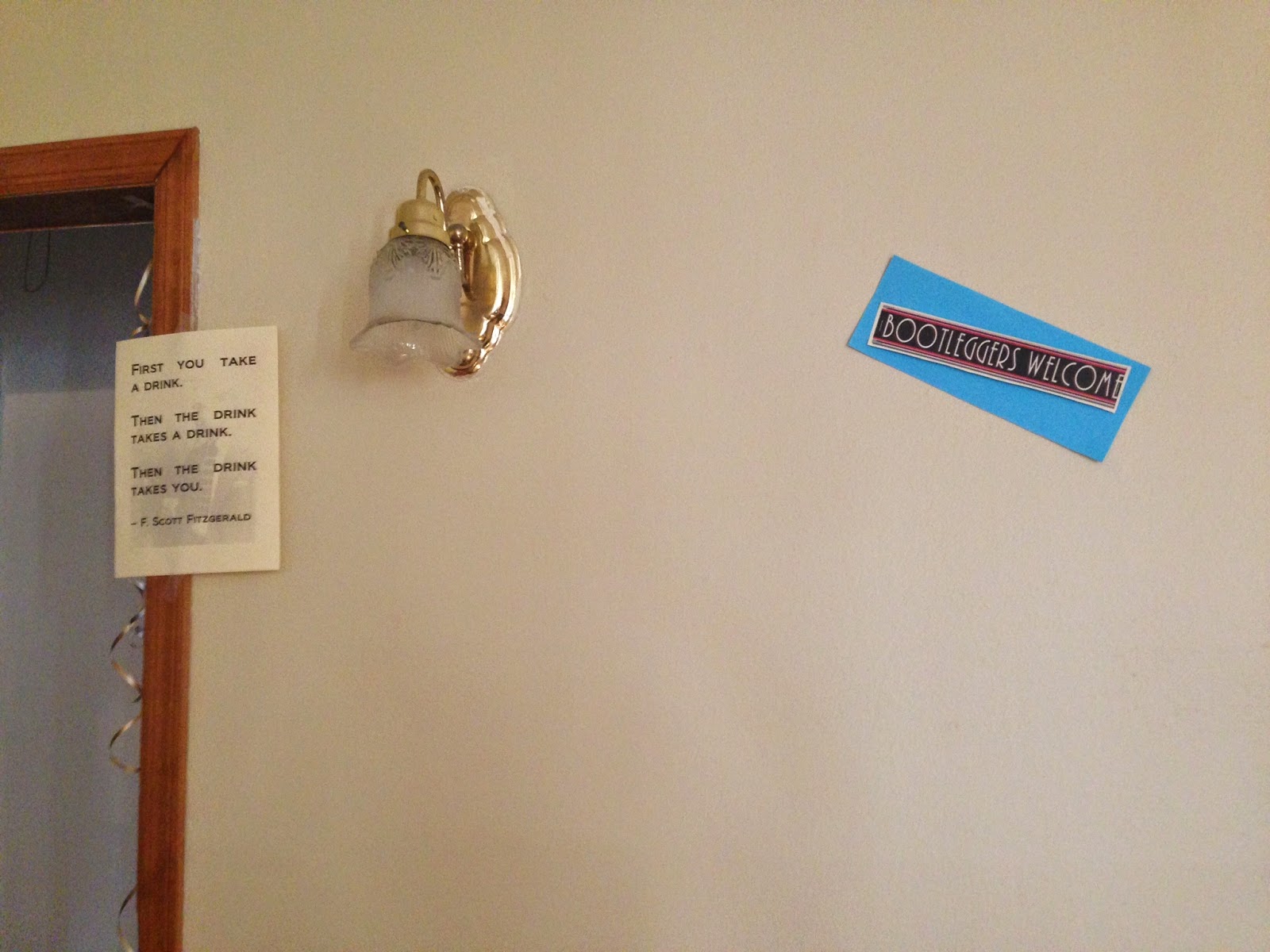 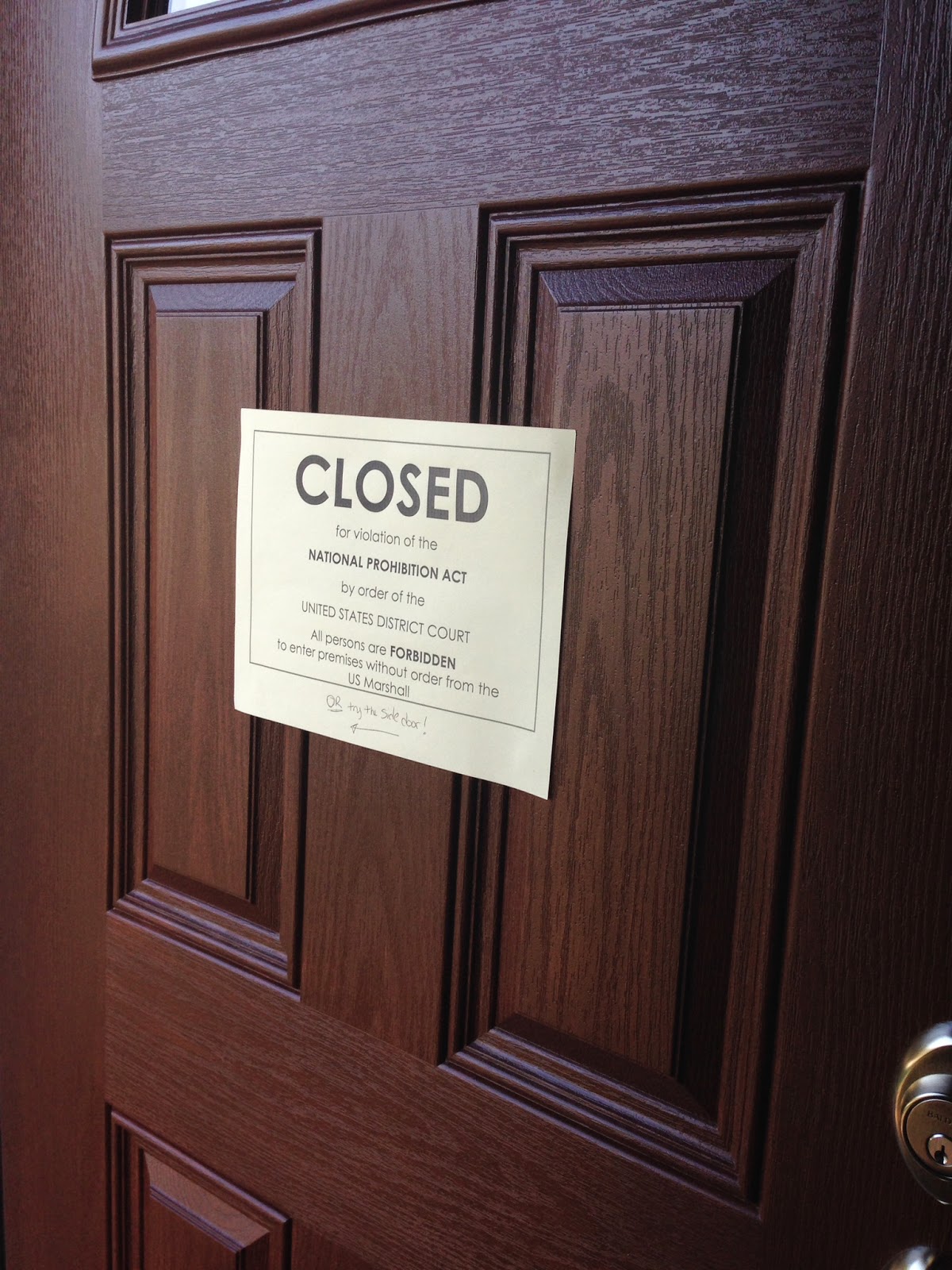 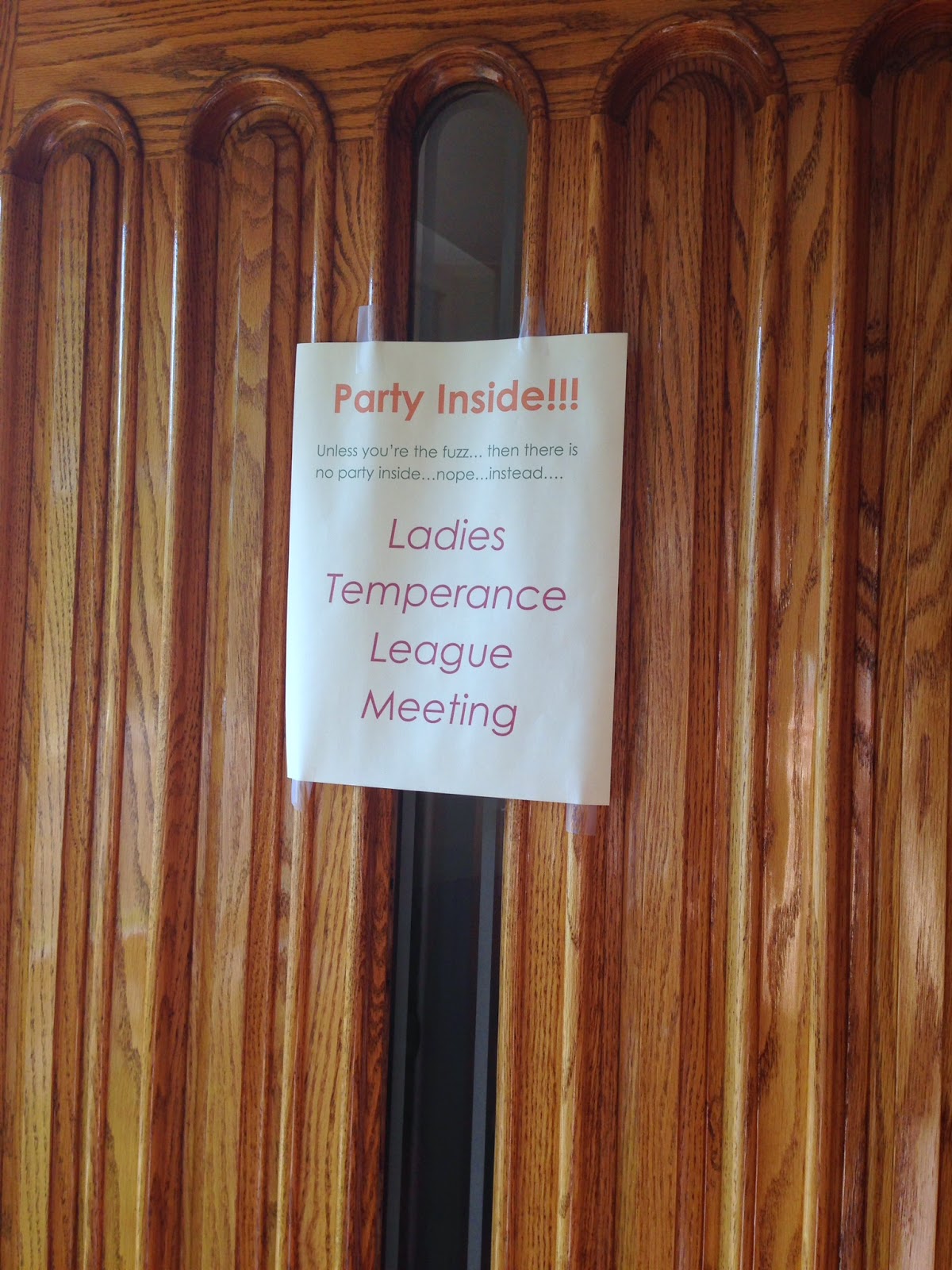 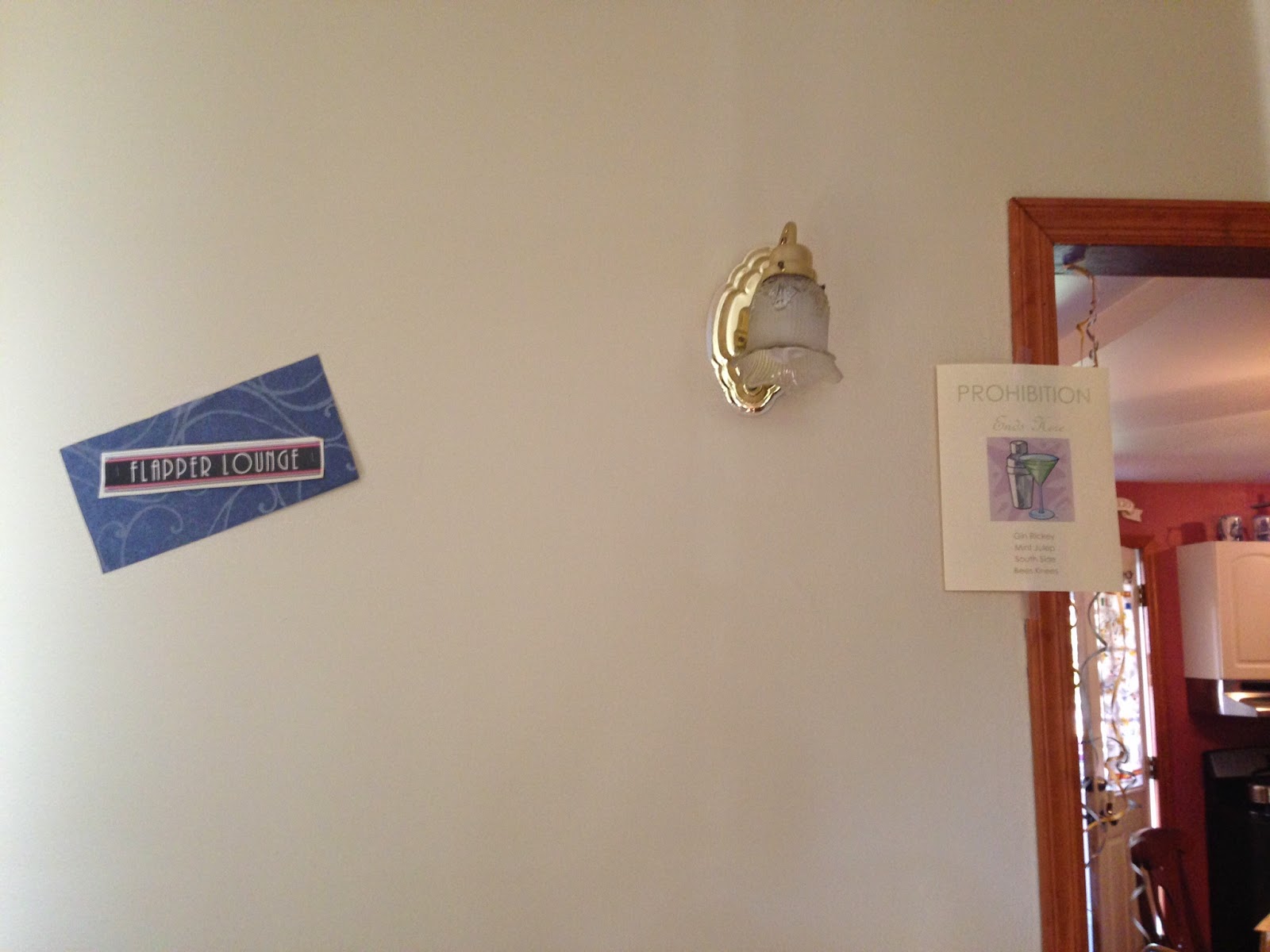 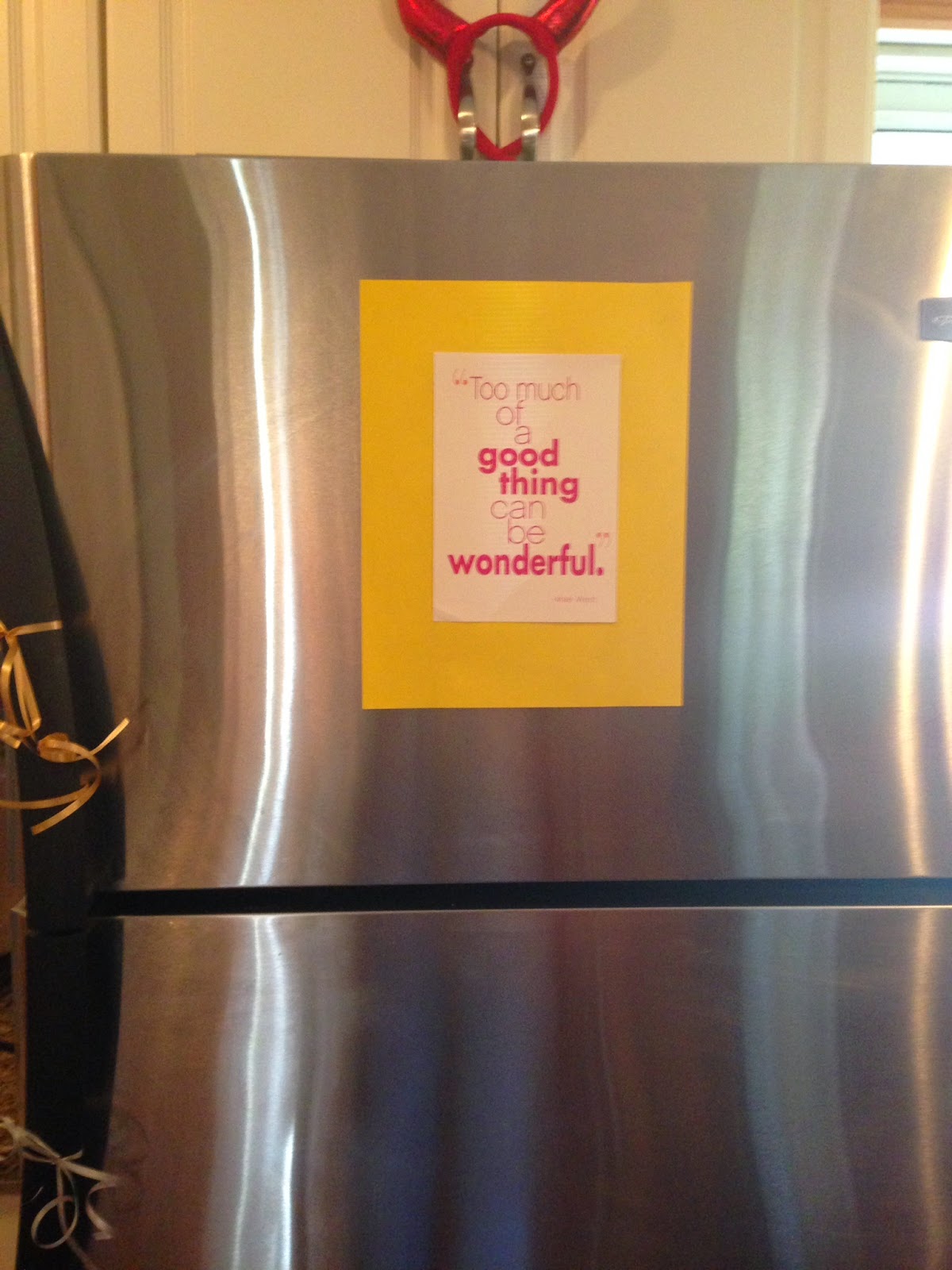 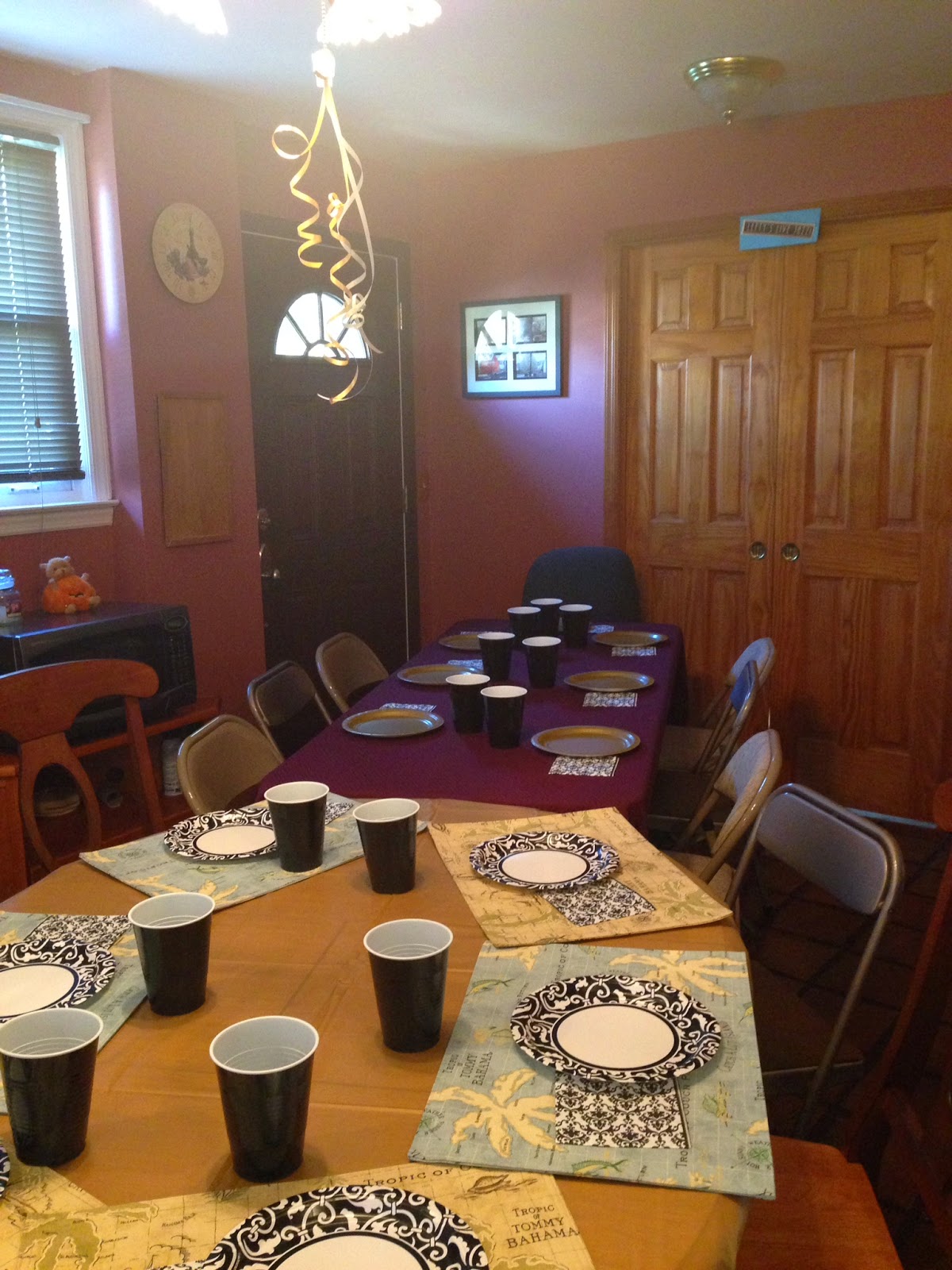 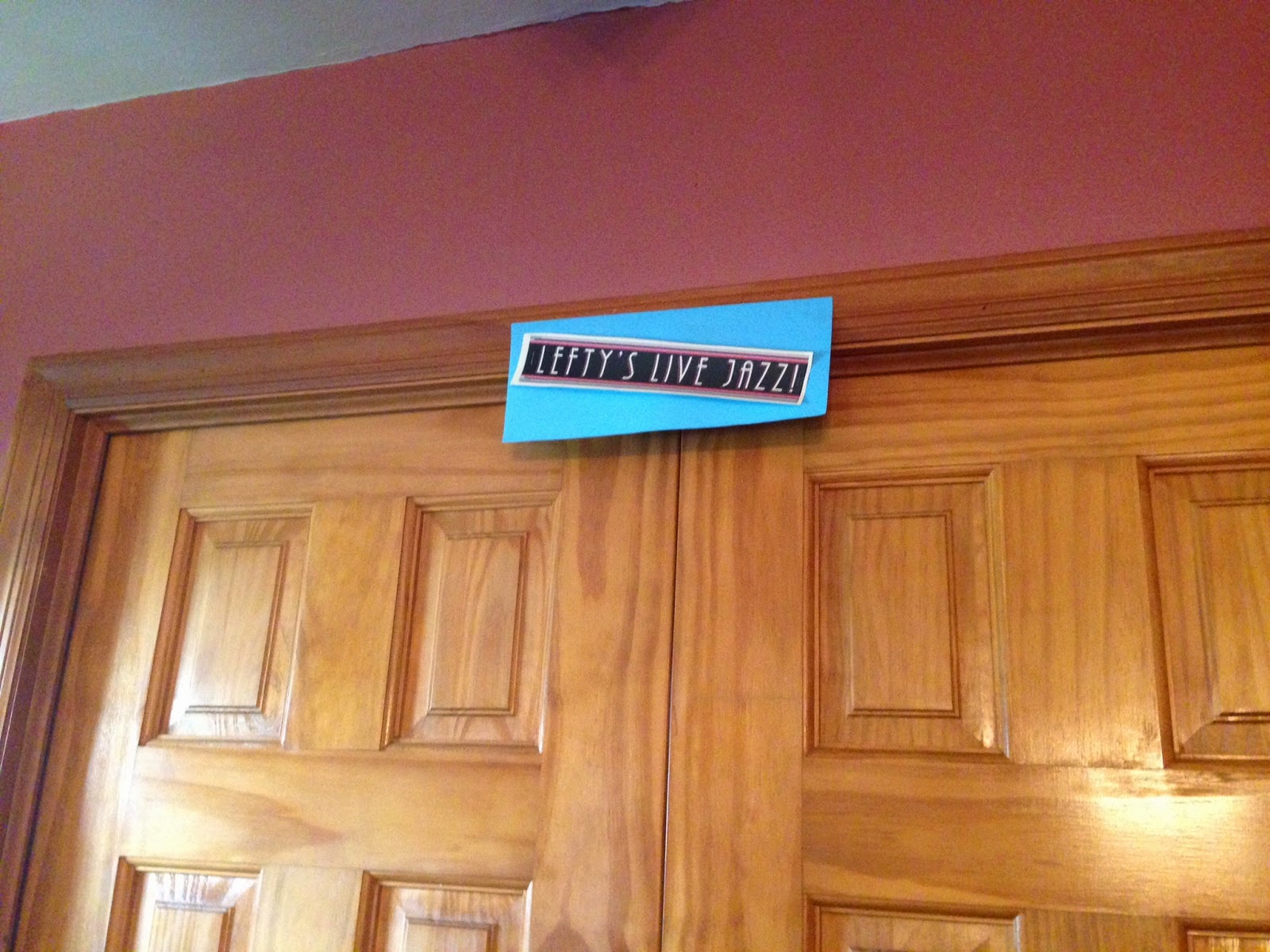 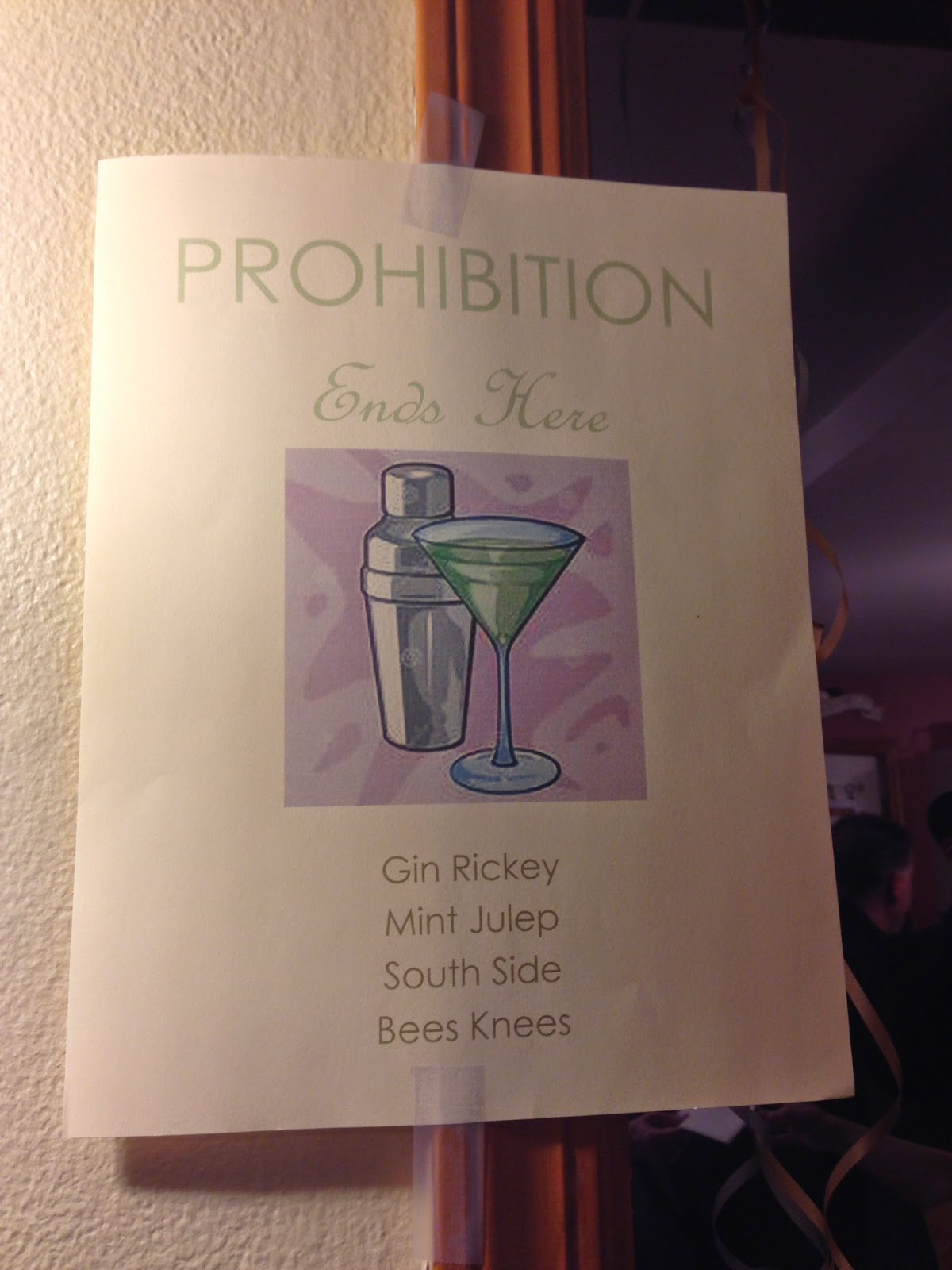 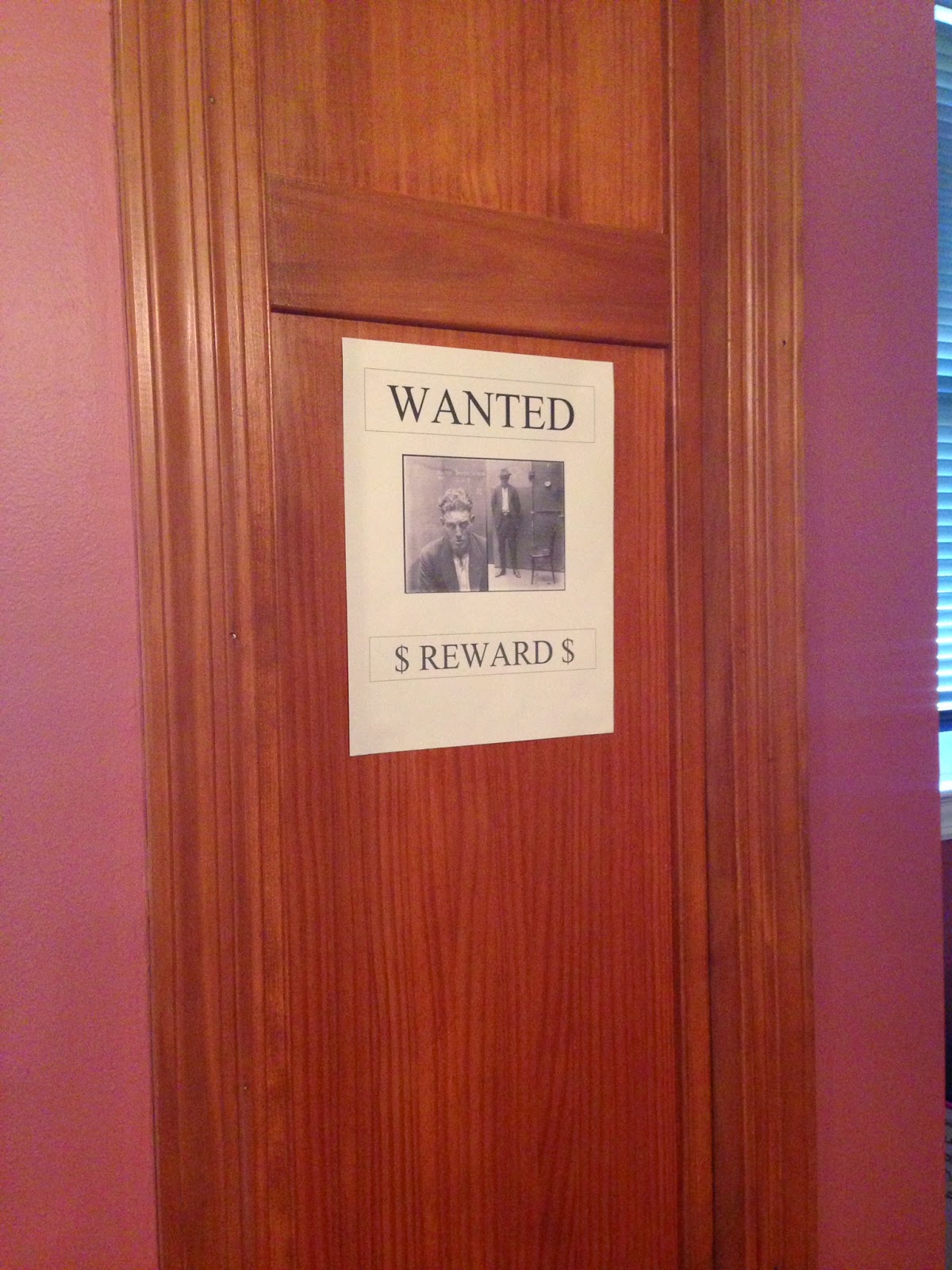 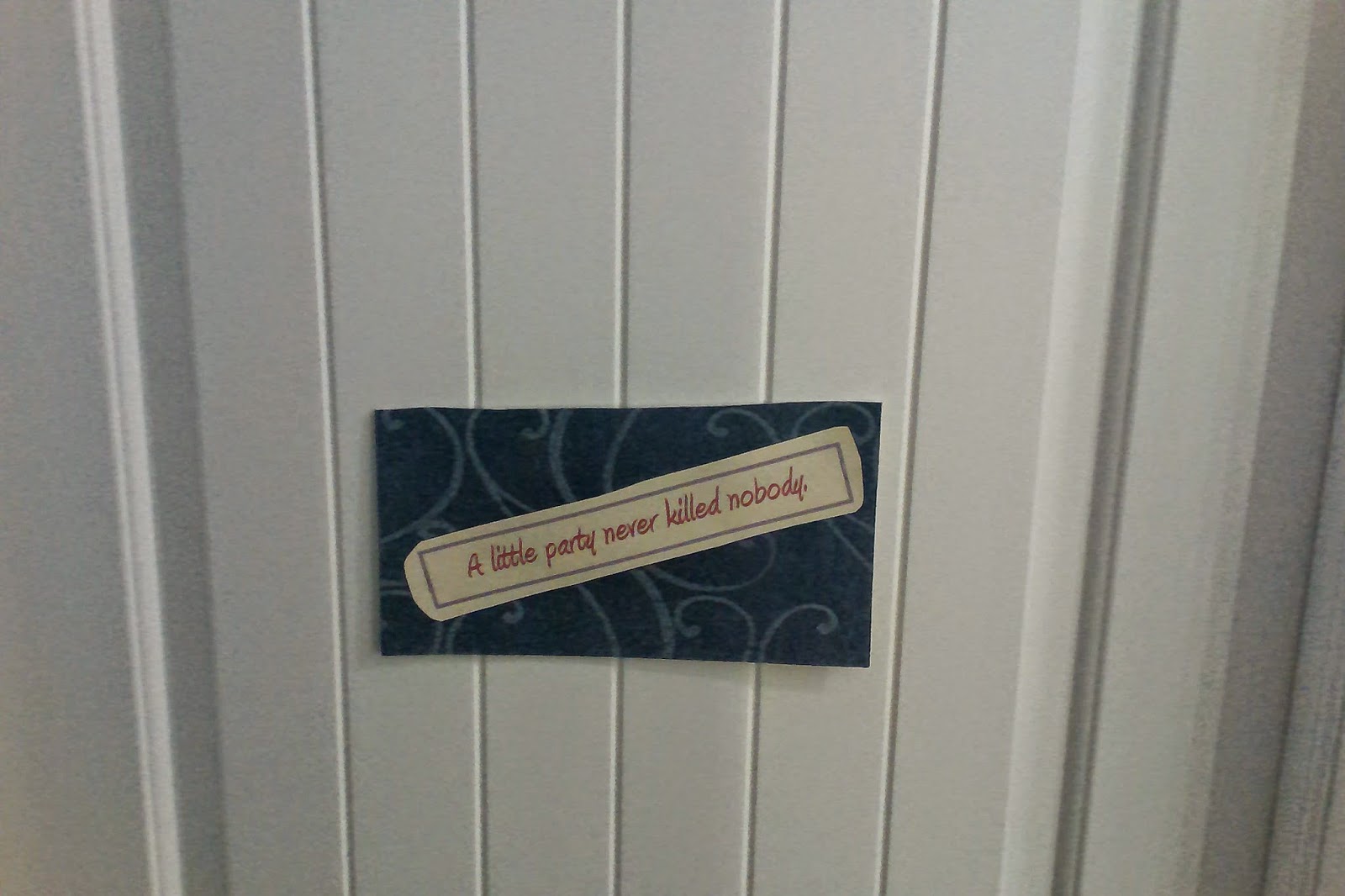 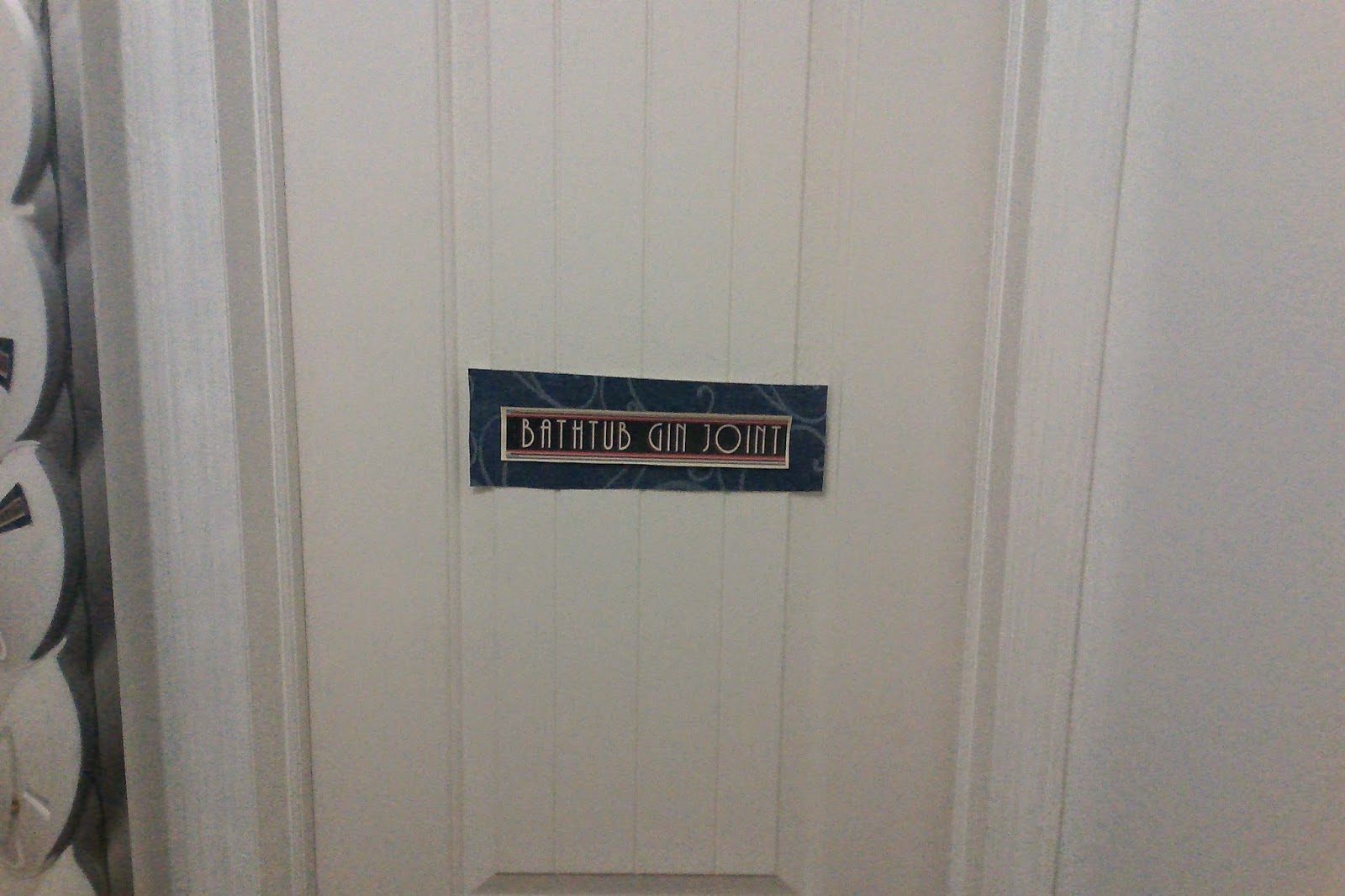 The premise of the night was that everyone would be assigned a character, everyone would received a name tag, some notepaper for crime solving, and instructions and hints for the night to interact with each other.  Each course of food (cocktails and apps, main course, and dessert) came with not only these clues but also games.  These games were to be graded, and so I found myself grading.  Even at parties, I'm grading.


The house filled with chatter and laughing and shrieks (and smoke -- we aired that out quick) and then the lights flickered and someone wound up dead.  Then we all figured out which way was north and had to diagram the murder scene.  Actually, this did not happen.  At first, I didn't even know why everyone kept asking which way was north because I was so busy grading and fanning out the smoke, that I was behind in my game play, which is also why whenever anyone said any clues to me, I responded with an "Okay!" and then went back to them ten minutes later with the actual response I was supposed to give.  The papers for the accusations had a spot to diagram the crime scene, but no one really did that.  Everyone did guess, though, and then we had to reveal whatever our final round clues stated.

Turns out, I knew nothing.  There were some fun twists.  I found out the next day that there was some more murdering that was supposed to happen but someone doesn't read instructions (meaning Eddie) so the final murdery stuff didn't happen.  That was fine.  We'd had enough mystery for one night. Who won?  S and S! Who lost? Everyone else.


The next day, my house looked like a horde of strippers had rolled around in it.  Glitter, spangles, fringe, and sequins  were everywhere.  I kept up the signs until I'd scooped up the last of the sparkly stuff and then returned to modern-day everyday living.  Except for the sign outside on the house.  That stayed up for at least a week.  I'd cut out the letters freehand and was dang proud; plus, a speakeasy ain't such a bad idea.

Posted by Christina at 7:00 AM