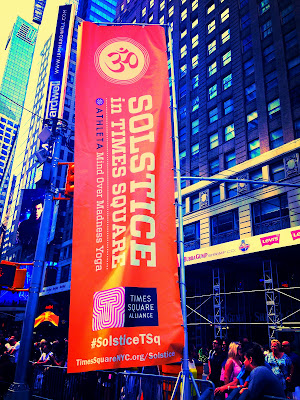 To celebrate the Summer Solstice, I dragged Eddie to Yoga In Times Square: Mind Over Madness. I've gone a few years in a row, and this year, it happened on a Saturday, so Eddie was available. I got him a ticket. I gave him the option: You can come if you want I got you a ticket I'd really love it if you came with me it will be fun. First he asked if he could come and watch from the side. I said, But you have a ticket. So then he said he'd go as long as no one would touch him to help him in the poses and if he could sit and drink water on his mat if he chose. I agreed to those terms.

I figured free yoga on a Saturday would be wall to wall sweaty people on very long lines. Our train was late, so we hiked very quickly to the sign in point. The line was practically non-existent even an hour before the class started while in the past, I had to arrive at least and hour and a half to get on a line already wrapped around the block. Hmmm, maybe since the classes began at 5:30 AM and ended at 9 PM, everyone who wanted to go was spread out over the day. We were on line in the shade. Our tickets got collected quickly. We received our first bit of free stuff: Chia something or other. Very exciting. (My excitement faded on the train ride home when I tried it and almost threw up because I was not expecting it to be chunky. It's chunky.)

We then got our yoga mats as the line quickly moved forward. We'd brought a mat each because in past years, the mats they handed out were sticky mats with no cushion. This year? Real squishy mats. So we now had four cushiony mats to use between the two of us. I was in my free stuff glory as we were herded into the yoga practice area and Eddie was amazed at how close we had to get to each other. Then we noticed the couple next to us and agreed that the girl had dragged her guy there as well. That guy was sitting on a mat wearing jeans. Eddie had worn shorts and immediately took off his sneakers and socks to sit on his mat. This guy was all about not doing that. We were in the hot hot sun and this guy just sat in his jeans and sneakers and socks and t-shirt next to his girl who was all yoga'd out in yoga gear. 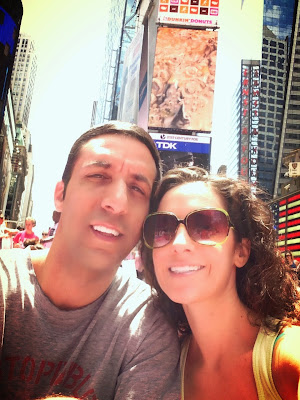 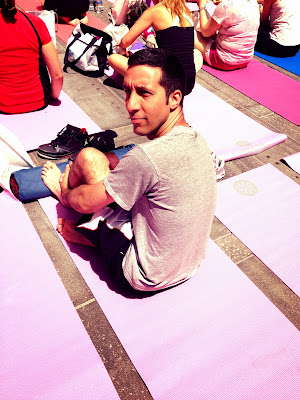 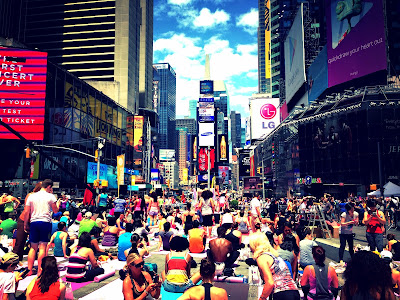 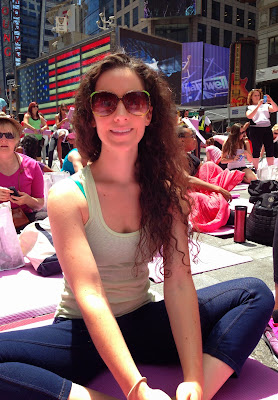 We waited for a pretty long time for the class to start. While waiting, a dragonfly wizzed by a few times and then landed on some girl's bag in front of us. The whole time, the two of us were ducking like children. Everyone else was in awe of how pretty it was. Clearly, we were not among people like us. We refrained from swatting at it. Instead, we silently cringed. Then I went through my free stuff we got in our goodie bags. 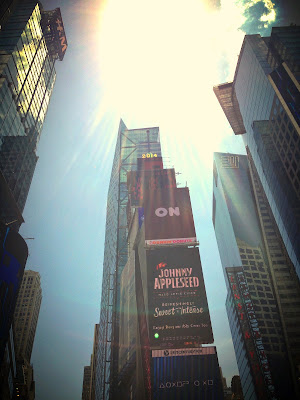 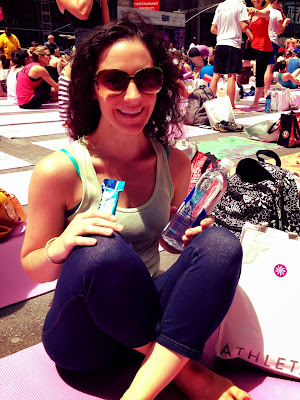 When the session began, the instructor started talking about her pregnancy. Amazingly, she was instructing the class while being like eight months pregnant. It's quite a feat. But then? She kept talking. Then she talked some more. What was she talking about? Mostly about being at one with the world and being separate from it and how being pregnant made her realize the difference. But then I tuned out. Eddie says she was also talking about giving light to the sun instead of taking light from it. Impressive! He listened more than I did.

Then she said, Let's all snuggle up and hold hands.

Clearly, this was a violation of Eddie's terms. I quickly whispered to him, I've never had to ever touch anyone else in all my years of coming to this! He gave a half sigh, and grabbed my hand along with the hand of the girl next to him who grabbed her guy who was still in jeans and sneakers and socks in the hot sun. The woman on my other side was very bubbly and happy to grab hands.

Finally, we got to some yoga. The sitting part was easy. The balancing stuff was easy. All the other stuff? Not so. Eddie was challenging himself in all the poses, doing really well for being the most inflexible person in the world. I was not doing well because my back was tweaking and I had to stop everything and not do the poses. The two of us pretty much laughed at each other the whole time, and it wasn't a very long time because the talking had taken up most of the session, so in no time we were seated again, during which time we were supposed to reach our arms out to the side and Eddie purposely put his arm across my neck, causing the woman next to me to crack up. Then we were laying down in savasana. It's Eddie's favorite pose. I like it, too.

Then we all sat up. Then we were told to hold hands again. Everyone take your grubby sweaty hands and touch each other. Fun times.

Then it was over and we clapped and we did our best to roll up our four mats and not appear to be bogged down by them. 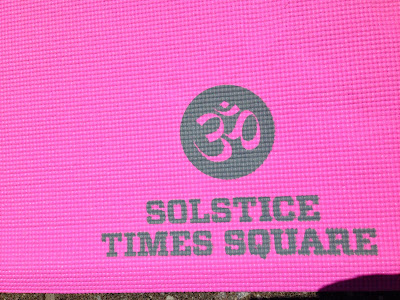 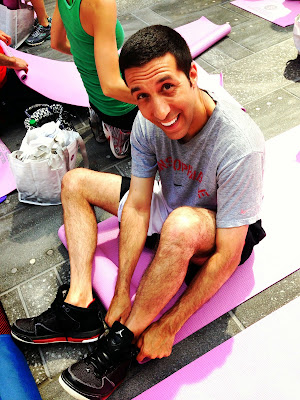 We headed into the yoga village to get more free stuff. I skipped the line for the coffee and headed straight to get SmartWater and coconut water. I also got a Weight Watchers ice cream pop that I had to eat immediately before it melted.

I also got lip balm and some Luna bars. I threw it all into our bags which were already heavy with magazines, nail polish, and coupons. And deodorant.  I somehow got lots of deodorant. Sometimes getting free stuff is almost like a job. 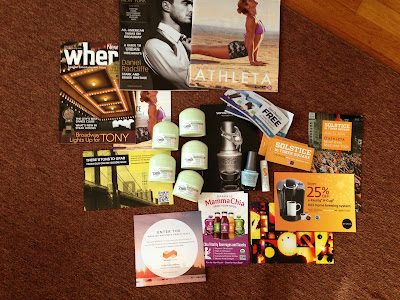 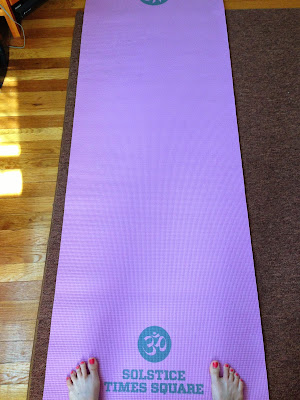 The next day, my ass hurt. My ass hurt so bad that I could barely move off the couch. The pain was coming from the place in my back that's the tightest. I was happy that I'd made the appointment with the chiropractor because hopefully he'd help me climb out of this pain because yoga--something the ortho told me could help--clearly was not working. Still, I couldn't be upset. I was surrounded by free stuff.

Oh, and on the train ride home, Eddie made a friend. This woman could not wait to get off the train, and so her ass was in his face for a good five minutes. 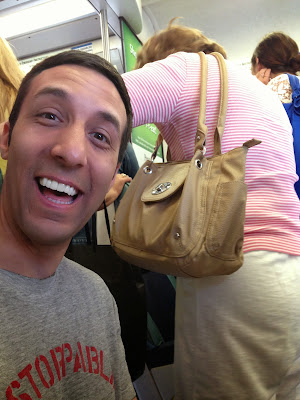