I am really bad at yoga.  That information will do nothing for my career as a yoga instructor, but I think it's true.  I usually think I'm really good at yoga and then I go to a yoga class and watch the instructor and realize, that's something I can never ever do.  Even now, I'm evaluating my own yoga practice, comparing myself to others, and using negative talk--all things a good little yogini should not be doing.  Hence, the being really bad at it.  Full circle.

The Olga Class
I was the first to arrive, no surprise, and I started to do my normal stretching.  Arms overhead, linked fingers, lean to one side, lean to the other, lean back, bend forward. All kinds of stretchy. I looked up to see Olga in a world class backbend.  This is her warm-up.  This is how she gears up her body to do other things.  I cannot do her warm-up. 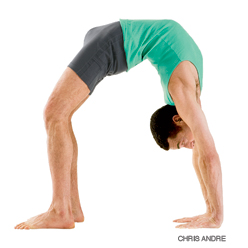 The class filled up and the woman next to me was saying how she was sad Olga was moving to Asia because she's such a great instructor.  I agreed she was a great instructor but was not so sad about the move to Asia because the great instructor was instructing us to get into poses that really stretched me to my limit.  She also did this thing where I sat, tucked my foot in with my knee up, kept my other leg straight, and then reached my foot of the straight leg with my hands.  Then she was like, Just rock forward and stand on the foot of the bent leg.  I figured she was dizzy from all the backbending and had no idea that it was impossible to do so.  Then she did it.  I did not.  BUT when I switched legs, I did it I did it I did it!

During the headstand portion, I did preparation for headstand, knowing full well that I was preparing for nothing. In the prep position, I watched the woman behind me. She got up into headstand in a really unstable and awkward way, she bounced off the wall next to her with her foot while the other one flailed all over the place, and then she fell forward, kicking the shade lamp catty-corner to my mat.  She landed with a loud thud, which was partially drowned out by her yelling out quite loudly, Shit!

Namaste to you too.

Olga also asked us to breathe like a dog.  I shit you not.  She was like, Breathe quick in and out like dog and then she panted.  Then everyone else in the room panted.  So then I panted.  Fun times.

The Flor Class
Flor has a way of getting my body to do things that I didn't know it could do.  She's the instructor I've had the most, and she keeps me coming back because I'm always amazed at myself.  This is not self-praise.  This is self-surprise.  During this class, we did a lot of balancing.  I can get myself into tree--with one foot pressed to the inner upper thigh of the other leg--with no problem, but I know my hips don't open (they also don't lie! ha! that's comedy), so my knee doesn't go to the side.  Flor, a very hands-on instructor, came over and kept poking at my butt cheek while lengthening my supporting leg.  "Now relax this...relax..."  We both started laughing because, as I responded, "It doesn't want to relax."  My glute was clenched so tight and nothing would make it relax, not even her poking. 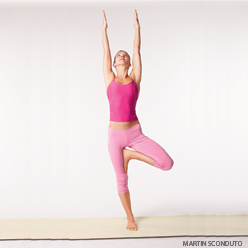 Later on, we were standing on one leg and stretching the other leg forward.  She demonstrated the posture and clearly reached one hand across her body to grab the opposite foot.  No one caught onto this but me because people were flopping all over the place, holding onto the wall, unable to grasp how to balance.  I grabbed my right foot with my left hand and started to twist very slowly to the right with my right arm to the back of the room, and Flor said, Oh look one person got it.  Heh heh heh.  Then she came over to help again, which meant I fell out of the posture because I was leaning on her.  Laughing again...until we got onto the floor.

In an attempt to open up our hips, she told us to kneel with our knees wide and feet together.  Then we walked ourselves down onto the floor and let our feet come up and knees slide out.  Holy tight closed hips.  She walked around helping everyone balance out their hips to get lower.  She told us that her teacher, a 70 something year old man, did this every day and made someone sit on his butt to make sure he got down to the floor.  I'm in my 30s and my hips were nowhere near the floor.  To get out of the posture, we slid our legs straight so that the inner thighs touched the floor.  I don't know how we all didn't simply get stuck there forever because sliding my legs back together didn't feel, hmm, what's the word...oh, yes, it didn't feel good.

Then she did the whole headstand shoulder stand all things I hate to do segment of the class, but because she's Flor and she can get my body to do things I never dreamed of, I held shoulder stand for a few seconds longer than the nanosecond I usually do AND I got partially up into wheel, the pose that Olga uses as a warmup.  After that, she had us in seated forward bend and she came over and said to me, Yes come from the solar plexus, she touched my back with one finger, and suddenly my face was buried in my shins.  No idea how that happened.

The Joanna Class
Having recovered from my hip psuedo-surgery at the beginning of the week, I was looking forward to a great vinyasa class.  Joanna's teaching tone is much similar to mine as are her detailed instructions as to where everything should be and what everything should feel like.  It's quite soothing and I feel like a rock star because I can do the class without having to take a break.  Only this time, after the eleventh uber stretch, I suddenly felt like my legs were going to fall off and had to take child pose.  Right after that, she opened the door and fanned it back and forth a bit, which is when I realized, wow I'm probably overheated and dehydrated.  I focused on the music, which I was really enjoying (even though in some songs the guy, I'm pretty sure, was talking to God), and I jumped back into the flow, and instead of being Super Rock Star, I stopped doing the postures as if I were six feet tall and moved my legs closer together. 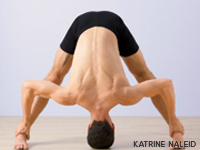 Since I'd overdone it halfway through, I was waiting for savasana to come.  We began savasana-ish postures while sitting, which was odd in a good way, and then we were told to lie on our backs.  Oh, heaven.  I could have fallen asleep, but there's some sort of ticking in the studio.  There's no clock in sight, but there's the ticking of the clock, so clearing my mind became a challenge since I was thinking about Edgar Allen Poe's "The Tell-Tale Heart."  The ticking!  Oh, the ticking! 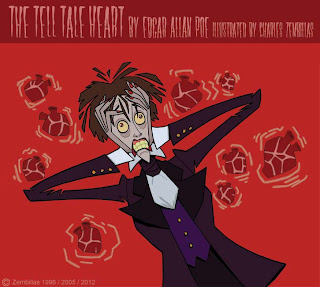 I've been wearing a salonpas on and off on my left calf for about two weeks.  When I came home from Joanna's class, I felt like I needed one on my right.  Today, it's my left again.  And the next class is at 5:30.
Posted by Christina at 9:55 AM

Email ThisBlogThis!Share to TwitterShare to FacebookShare to Pinterest
Labels: Fitness