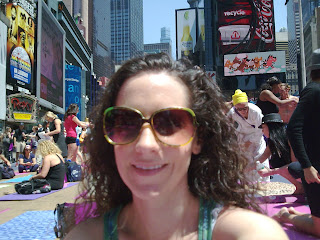 I have taken hot yoga classes before, but I have not taken any Bikram classes.  I suppose I still haven't since the temperature in Times Square did not reach 105 on June 21 for the Summer Solstice Mind Over Madness celebration.  I'm kind of happy it didn't.  It was a good way to ease myself back into the idea of doing yoga in desert-like heat, except that this was not the desert.  It was New York City.  That meant it was not a dry desert heat.  It was more of a urine humid heat.  You know, summer in the city.  I spent my time on line fanning myself, sipping cold water I'd brought along with me, eating a cold apple I'd brought along with me, and trying to stand in the shadow of the man in front of me.  I was there for the 1 PM class, which meant I had to get on line at around 11:20.  They let us in a bit before noon.  While I waited, I got my first free item of the day. 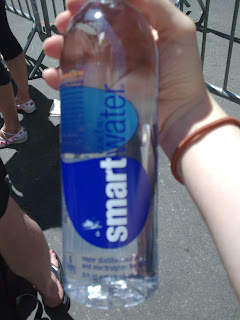 I saved it since my water from home was actually colder.  When the line started moving, I picked up more free stuff like a mat and a bag of magazines, coupons, and Luna bars. 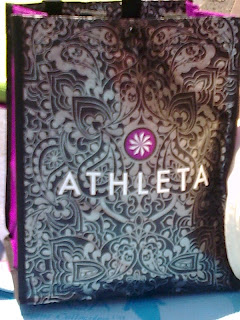 So now I had two bags full of heavy stuff -- the one with the free stuff and the other one I'd brought along that had snacks and books to keep me occupied while I waited for class to begin.  Since the sun was moving into high noon position, I was happy I'd brought along a towel. 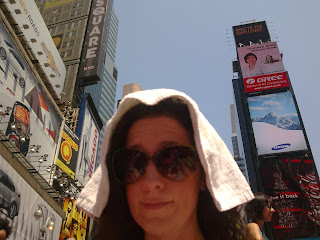 In addition to reading and hiding from the sun, I also kept myself occupied by watching the big screen where lots of yogis were being broadcast. 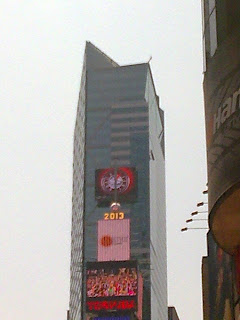 The class was fun.  Instead of following one instructor, we followed a bunch of them from the Bikram NYC studios.  The one who astounded me most was the woman who seemed to be in her 60s (knowing how my age-guessing is always off, she could have also been 55 or 83).  Following the Bikram sequence was easy.  Getting into the poses with people not even two inches away on either side was a bit tricky.  At one point, I saw a girl in the row behind me accidentally plant her face in the ass of the girl next to her when we were facing the side and bending forwards.  She had her eyes closed.  Good for concentration but bad for avoiding asses of strangers.

Towards the middle of the sequence, we were in Savasana (corpse pose in the middle of the practice--a good idea!), and I was thinking, wow someone smells really bad.  I did the next few poses and we came back to Savasana and I realized, wow I'm the one who smells really bad.  It was the result of the train ride, subway ride, walk to the line, wait on line, wait on the mat, and the first half of the class all coming together.  Then I figured, everyone smells in New York, so I was okay with that.  Plus, the class was almost over, so we could all deal with it.

At the end, I went through the yoga village and collected more free stuff: hummus, pita chips (that were stale--gross), a t-shirt that I won't wear in public because it's an advertisement for Tampax, more coupons, protein powder, more Luna bars, SmartWater, and Athleta hair ties/bracelets (no one was really sure of what they were, but we took them because they were free).  For some reason, all the calm yoga people turned into greedy pushy people, crowding the lines and being very unorganized.  Very un-Zen-like.  Maybe they were hungry or hot or both.  In any case, I decided I did not need another Luna bar that badly to get crushed by smelly, sweaty yoga people.  I picked my places wisely, grabbed at least two of everything (once on the sweep in and once on the sweep out), and got my ass back to Penn for the last off-Peak train home on which I kept my arms down and my bags close as to not offend anyone with my pungency.  And if they were offended, well, maybe they should stand in the hot sun for three hours and do some Bikram and find out just why it's so great to smell so bad.  Namaste. 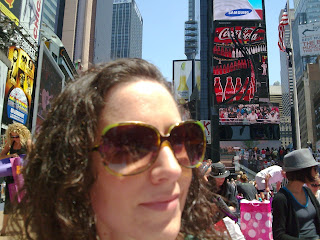