I Hope You Dance, Precious

S and I noticed the cake sitting on the table in the front of the room as we jumped into the dance that had already begun, of course, I'm guessing around 7:00 AM. S had to change from work clothes into jeans. Ha! Jeans! For Jean. Anyway, she'd brought cookies and then was like, They got a cake! I was like, Yeah, I wonder how that went down. She was like, Or maybe Jean brought the cake. I wondered, Yup, maybe she brought it and put it out and said no one could eat unless we danced first.

I'm pretty sure that's how it went down because there was no mention of the cake as we danced every dance in rapid fire that Jean could think of and that people were requesting. We had a pretty full class and Jean was taking note of everyone. After dancing about five dances in a row, she stopped and was like, Now let's eat cake.

I wandered over and heard Jean say, Oh, that's what I hope for you all; I hope you all dance. When S came up behind me, I explained, They got the cake and wrote on it "I Hope You Dance." To a dance teacher. Who already explained that she was retiring from only the night classes. Which means she's going to still dance and probably would continue to dance at least once a month at the church with the Filipino child star. Then I felt only a little bad for my snark when Jan the most friendly person in the world looked over at us and the two women who are also on our side of the room (more of that in a moment) and said, Hey you want cake? and motioned for us to come over. S had cake which was berries and cream so I was like, hey they made the cake for you, because that's her kind of cake. I had hot chocolate, which they'd also brought.

Side note about "our side of the room." Between dances as Jean searched and searched for a song because she still doesn't have a playlist, S was like, People really hate us. I was like, Yes I know. She was like, No, really, look around. On our side of the room was us in the back and then Fun Hair Clip and the Asian woman who talks to us and we don't ever know what she's talking about. On the other side of the room were the four women in the clique, the Catholic sisters, the new woman, the woman who wears the Yankee shirt (although she's stopped wearing it in these past three weeks and has been more dressed up), the woman who can't spin, and the woman who likes when I stretch my arms out when I do the nightclub step. That's ten people crammed into one side of the room to get away from us. And the only reason Fun Hair Clip and the Asian woman are on our side is that they are just kinda oblivious to, well, reality.

Anyway, as we ate cake and drank hot chocolate, the clique decide to ask "the girls", aka us, how to find a song on a phone. I pointed to S. She was like, what kind of phone? They were like, Her phone, and pointed to one of themselves. S was like, I have I Hope You Dance on mine, which is the song they wanted to hear. By Leanne Womack even though I was like, I don't think she sings that and S was like, Uh yes she does. Then I realized that Leanne Womack and Leanne Rhymes are two different people.

Jean then asked, Girls, what dance shall we do next? We said, Something In The Water. She said, that's a great one.

So we did Something In The Water on stomachs full of cake and hot cocoa. Despite the rumbling of the chocolate drink, I was in high spirits by the time the song was over and so was everyone else. Why? Because you just can't feel sad or bad about anything when that song comes on.

Then, when I didn't think I could get any higher, Jean played Stealing The Best. The Irish Song! The Irish Dance! S was like, I've never seen your face look the way it does when you get to break it down during this dance. I was like, It's called pure joy.

Really, all of line dancing is pure joy. The night came to the end after Jean's insistence on us doing Martini Time. No one really cares where Yolanda is, but since Jean wanted to do it, we did it because that's how these things work.

Then it was over. She thanked us. We thanked her. This went on for quite some time. Then S gave her the cookies and I whispered to Jean that they were from S's business and they are gourmet and delicious. Jean was like, Why didn't she tell us this sooner? Then S asked if we could take a picture with her and Jean grabbed her box of cookies to pose. Then everyone else took pictures with her. Jean asked if we'd see her again. I explained that the church is in my neighborhood so I'd have to come by at least once. S said she'd come by if she didn't have to work and then informed Jean that she had taught TickTock to her coworkers after we'd learned it from her. Then I told Jean I'd see her some time at the church and I'd stand near her so she could help me. Everyone laughed and we said our goodbyes and gave final hugs and then? It was over.

When we were walking out, S was like, Did you hear what she called us? I was like, The girls? She was like, aside from that. Nope, I hadn't. S said, Jean called us precious, you know, like the word you use to describe an infant. Yup, that sounds about right. 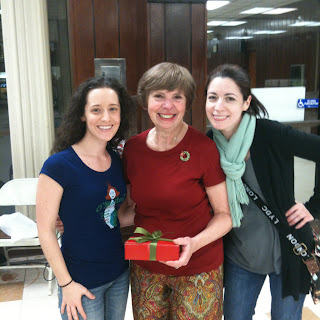 Posted by Christina at 2:02 PM