Let The Sun Shine In 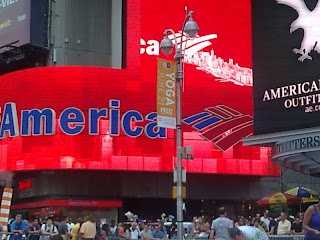 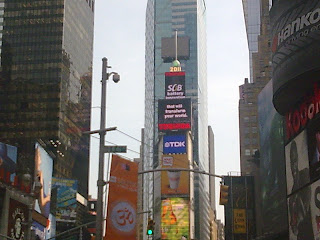 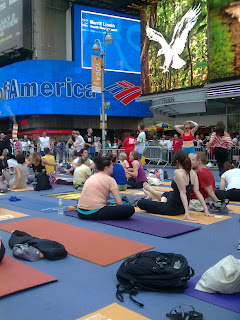 I have wanted to go to Times Square Summer Solstice yoga since it started. Every year, June 21 comes around and I have stuff to do. This year, I put it on my calendar way before June so that no stuff would get in my way.

It came at a perfect time. I'm getting back into a yoga groove lately and sadly haven't taught a class in two weeks, so it was much needed. I took a train into Penn and walked to 47th and Broadway where check-in was. I got there much earlier than the 5:30 requested time. That was a good thing. There were barricades up and lines to weave through. I stood and waited in a ball of sweat since the walk left me a little breathless. It really wasn't so much the walk than it was the people who don't know how to walk down a busy city street that really got to me. Again, yoga was coming at the perfect time.

While on line, someone from the story Lucy took my picture. Cute, huh? 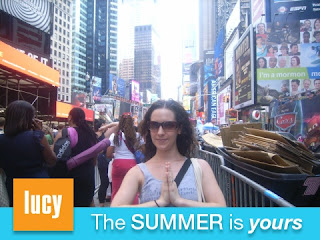 As they let us through, they handed out a mat and a bag and a water. The bag had a chocolate peppermint Luna bar (I usually don't like Luna bar flavors but this was delish), a few magazines, a lip balm, and a bunch of coupons. I was happy to finally be let in because at the beginning of the line, participants who had signed up prior to the event were getting headed with the staff because the participants wanted to make sure they got in before the other people on the far line who had not signed up beforehand.

Seriously, it was a free event and they gave us free stuff. AND it's a yoga event. Find your Namaste, people.

The mat was thin but good for non-slip action. I used it under my own mat so that my mat did not touch the surface of the streets of Times Square. I found a spot on the step in the middle and put my bags around it widely to save some room for AK. People were coming over and telling us to push closer and close up the gaps. I pushed and then moved back when they left.

It filled up pretty quickly. More people had wedged their way into the row I was in. AK texted about a half hour later and said she was almost there. By the time she got there, the guards were not letting people into the space I was in anymore. They were being sent to the next spot across the street. We did some phone calling and she did some kindly asking, but the guards kept sending her across the street. She was one of the first ones there, though, so she got to pick her spot first. I told her that she had to come across as soon as we were done so she could see all the free stuff we could get. One of AK's more admirable talents is her ability to get free stuff. I figured that if she didn't get the stuff they were actually giving away, she'd somehow go home with all of Times Square in her pocket free of charge.

Then she left and someone from the Times Square Alliance went up to explain how he started the Summer Solstice in Times Square. There was a lot of thanking corporate sponsors. Then he introduced us to our instructor, Douglass Stewart. This guy got us right into the groove of yoga as well as our surroundings. He took us through a sometimes challenging routine complete with light-hearted humor. He was completely inspiring. Some women around me were having trouble following along with some of the postures, but they kept at it and kept laughing as he encouraged everyone. I did all the postures and even got my ass and feet up in what I call Raven and what everyone else calls Crow. I was like, wow I'm doing it. And then I looked ahead of me and saw the woman in front of me doing it perfectly. That was a downer. But then I looked up at the screen, saw the instructor with a big smile telling everyone how well we were doing, and I was fine again.

By the time he told us to sit on our mats, I was ready for it. Everything was a little bit sweaty. Even though my mat wasn't in direct contact with the ground, things were getting icky. Stuff in the air was attaching itself to me. Basically, I was gross and ready to be done soon. I don't know how people were walking around barefoot. I love to be barefoot, but I've also experienced cityfoot when I wear my flippies for a long time in the city, and cityfoot simply doesn't come out until after a few showers, so being barefoot was not something I was quite ready for. I was happy to have the experience of lying down in Times Square. It was something I wouldn't do in any other situation.

When the class was over, everyone gathered their stuff quickly. AK appeared in my section and we hit the booths. Some woman got all bent out of shape because she thought we cut a line we'd been standing on. Not very yogi-like, lady. Some people just don't get it. AK and I didn't budge. We ignored her. The line was to spin a prize wheel for a radio station. Really, not something to get all in a huff about.

Then we got some free towels from Febreeze and a bunch of bite-sized Luna bars. I wish Luna Bars would come in those sizes in the store. I would be more likely to buy them. Not having eaten dinner, they were exactly what I needed. I finished off the free water I got and later on read that the bottle was biodegradable. It's probably really expensive because of that so I wouldn't buy it. The water was good though, if water can be good.

The brochure for Solstice in Times Square says, Anyone can find tranquility on top of a mountain. Can you find it here?

I can happily answer, Yes. It was the complete yoga experience. I have it written on my calendar for next year already.

Watch live streaming video from timessquare at livestream.com
Posted by Christina at 11:24 AM